ProWein 2023: the who’s who of the wine and spirits industry 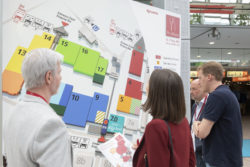 Soon that time will have come round again –   ProWein 2023 will kick off from 19 to 21 March. However, even today international wine and spirits professionals can already obtain an overview of the global ranges awaiting them at the world’s biggest and most relevant trade fair for wines and spirits in Düsseldorf. At www.prowein.de the who’s who of the sector is represented – and what’s more – for 365 days a year. The exhibitor database lists the key data of the over 6,000 exhibitors from around 60 countries in a coherently structured way. Here the company profiles and data, the product and press news of vintners, joint participations, importers and exporters, spirits and craft-beer suppliers are available online – ensuring the ideal digital platform to perfectly organise your visit to ProWein.

13 exhibition halls await visitors with cleary structured product ranges. This – and the extra-wide aisles – guarantee a quick overview and a stress-free visit to the trade fair. The product ranges are grouped as follows:

Curtains up for current trends & topics

ProWein would not be so successful if it did not pick up current topics and address in the form of trend shows, special shows and event forums. These include:

No less successful are the satellite events of the ProWein World in Asia and South America. In 2023 five trade fairs will feature on the agenda. Not forgetting the “Wine & Gourmet Japan – powered by ProWein” in April 2023, which will enhance the ProWein World as ProWine Tokyo from 2024:

For current information on ProWein, on the ProWein World as well as press photos visit www.prowein.de