Some 5,500 exhibitors from more than 60 countries 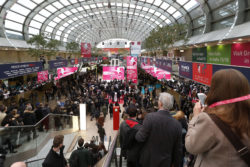 There is no way around ProWein – the leading International Trade Fair for Wines and Spirits in Düsseldorf. With approximately 5,500 exhibitors from over 60 countries it offers the world’s largest range of wines, spirits and craft drinks. For the international professionals from specialist retail, food retail and the hotel, restaurant and catering sectors ProWein from 15 to 17 May 2022 is therefore the industry’s uncontested key event and ideal platform for networking and scouting new trends and products.


Against the backdrop of the rapidly spreading Omicron variant Messe Düsseldorf had postponed ProWein from the accustomed March dates to May at the beginning of the year. “December to late January were marked by a palpable sense of pessimism and insecurity regarding the expected course of the Omicron wave. By rescheduling the trade fair to May we managed not only to increase planning reliability for exhibitors and visitors but also to ensure clearly improved prospects regarding anticipated international attendance. Meanwhile, the current course of the pandemic – as well as the roadmap developed by policymakers to open up public life again – provide a very solid basis for the event to take place in May under the most positive conditions imaginable,” explains Michael Degen, Executive Director at Messe Düsseldorf, speaking at the international Media Summit in Düsseldorf on 23 February.

In fact, the May rescheduling has met with very positive feedback from the international industry. “ProWein is an institution. Without this trade fair we would not be where we are today. Trade fairs are important in a global world but without international guests they are a bit like a school get-together with just your classmates,” says Dr. Martin Tesch from the wine estate Weingut Tesch (www.weingut-tesch.de) on Germany’s Nahe region, aptly putting it in a nutshell. Magdalena Pesco, General Manager of Wines of Argentina (www.winesofargentina.com), arrives at the same conclusion: “Postponing ProWein to early summer was a good idea and will pay off for everyone at the end of the day.” This view is also shared by such international visitors as Gretchen Thomas, VP of Creation of the Barcelona Restaurant Group/USA (www.barcelonawinebar.com), who underlines a view echoed by many other buyers: "For exploring new wines and networking with suppliers, my company has found no better resource than attending ProWein. We are able to accomplish months worth of work and meetings in just a few days. All manner of winery sizes and wine styles exist at this event, making it extremely relevant to our diverse wine program, particularly as we are sourcing small production artisanal wines for a growing restaurant company with multiple locations. So happy we'll be able to attend in person this May!"

From 15 to 17 May to the tune of 5,500 exhibitors from over 60 countries will be spread across the 13 halls of Düsseldorf Exhibition Centre, clearly segmented according to country and region. “The international brand leaders will be represented here as will importers and exporters, agencies, select estates and the individual wine-growing regions,” remarks Bastian Mingers, Project Director at ProWein, and adds: “ProWein has a unique selling point: no other event worldwide offers this comprehensive product spectrum. Not even Covid-19 can slow us down.”

Italy is represented in Halls 15 to 17 with all its growing regions including the biggest joint participations from Veneto, Piemonte and Tuscany. Alongside Italy’s best-selling companies such as Zonin, Botter Vini and Fratelli Martini, numerous top-notch producers will be represented including Castello di Ama from Tuscany, Elena Walch from South Tyrol and Elio Altare from Piemonte. The wine nation Austria will be hosted at the forthcoming ProWein in Hall 5 while Portugal will feature in Hall 13, and Spain in Halls 13 and 14. Hall 12 will be reserved entirely for New World producers, including amongst others the Wine Institute of California, Wines of Chile and Wines of Argentina. In Hall 11 the focus will be on spirits.

Halls 9 to 11 are in the hands of the French wine industry. All wine-growing regions of “la grande nation” will fly their flags; occupying some 15,000 square metres of exhibition space this is almost a trade fair of its own. Household names like Les Grands Chais de France, Castel Frères, Albert Bichot, Bernard Magrez, Dourthe, Paul Mas and Gérard Bertrand are represented. Serving as the “golden entrée” to the France area is the Champagne Lounge featuring such well-known brands as Ayala, Alexandre Bonnet, Collard Picard, Deutz and Heidsieck. Add to this, a great number of Champagne producers participating with their own stands: Bollinger, Charles Gosset, Nicolas Feuillatte, Lanson and Bruno Paillard. ProWein 2022 will see to the tune of 120 producers exhibit here, providing a comprehensive overview of the exquisite sparkling wines from the Champagne region.

Curtains up for the new Hall 1: inaugurated in September 2019, the new Hall 1 with its representative entrance Süd will be used for ProWein for the first time this year – for the German suppliers, to be precise. Just under 800 exhibitors from Germany will be featured in Halls 1, 4 and 5. All relevant German wine-growing regions will join the fray such as Baden, Moselle, Nahe, Pfalz wines with some 40 vintners, Rheingau, Saxony with its state-owned estate Wackerbarth and the region Württemberg. Also flying its flag at ProWein 2022 will be VDP (Association of German Prädikat Wine Estates) with some 70 estates from throughout Germany as well as the wine producers Dreissigacker, Henkell Global Freixenet, Hensel, Herres Layat, Molitor, Schlumberger, Schneider and Weil – to name but a few. Likewise, the organic segment – featuring international organic associations like Ecovin, Bioland, Demeter and Biodyvin plus Vignerons de Nature as well as individual exhibitors like Peter Riegel Weinimport or Can Axartel from Mallorca – will again all be exhibiting with representative ranges at ProWein. The popular special show “Organic World” has seen registrations from an additional 45 wine growers from Europe such as Italy, Greece, France and Spain.

“same but different”: 120 exhibitors from 24 countries

“same but different” (sbd) is a real highlight at the heart of ProWein 2022. Approximately 120 exhibitors from 24 countries will showcase a highly topical and versatile range of craft spirits, craft beer and cider in Hall 7.0. This means the special event is once again fully booked thanks to its special “recipe”. The hallmark and secret to “same but different’s” success are its unique spirits and the unrivalled atmosphere so typical of the activities in this exhibition hall. This sets sbd clearly apart from other events. As different as the focus of these exhibitors may be, they all share the same aim of careful, sustainable and creative processing of raw materials, great craftsmanship, often the principle of regional sourcing – and, of course, a great passion for the product and new trends. Hall 7.0 presents pioneers, trendsetters and market leaders from the growth segments of craft spirits, craft beer and cider – exactly the right place for professional visitors from trend hospitality, the bar community but also food retail.

For gastronomers the forthcoming ProWein will prove a particularly attractive destination. In addition to the product portfolio of the approx. 5,500 exhibitors from throughout the world, the special show in Hall 4 “urban gastronomy by #asktoni, alias Toni Askitis & ProWein” will become a highlight: workshops with tastings will specifically cater to the needs of hospitality professionals and the various levels of knowledge of hospitality staff. A corresponding line-up of workshops is offered for beginners, advanced and professionals – tailored to the varying needs.

For current information on the leading international trade fair for the wine and spirits industry – as well as visuals – visit www.prowein.com.