The Journey to the Soul of Wine

'Back to the roots': Qvevri wines are in a category of their own – and they now have Unesco World Heritage status.

You will not find a bigger expert on winemaking in traditional amphorae, which are called Qvevri in Georgia, anywhere else in the world: Giorgi Dakishvili is a degree qualified oenologist who holds a doctorate in his favourite subject. "Wines from amphorae simply have more soul," explains the man, short in stature, whose friends call him Gogi, "but making them is a big challenge." If this challenge is mastered, however, it results in wines that are unforgettable and which are in a category of their very own: Wines that are characterised by tannin, with no pure culture yeasts or enzymes, filtration or sulphur, with a thick polyphenol structure, an orange colour and hints of spices, fine herbs, dry fruits and almonds. If the grapes and cellar sanitation are not first rate, however, the end result will quickly find its way into the vinegar jar...

A tradition that celebrated its beginnings 8,000 years ago in the South Caucasus, today's Eastern Anatolia, is now happily making a comeback in Europe. An increasing number of daring vintners are going 'back to the roots'; some are experimenting with one or two Georgian Qvevris or Spanish Tinajas, while others have turned the full focus of their production to it. There can be no doubt that winemaking in amphorae is still a niche business, yet interest in it is quickly growing. 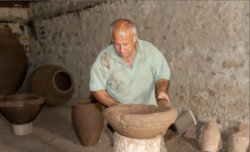 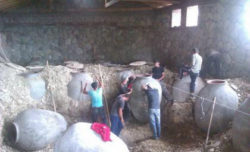 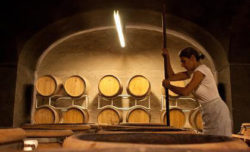 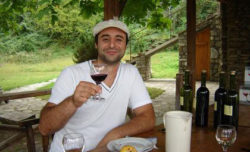 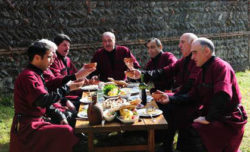 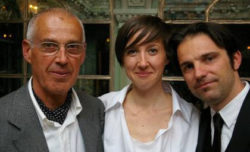 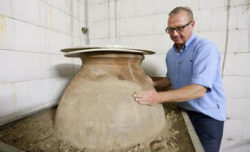 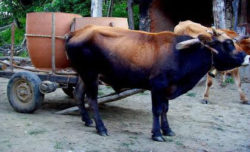 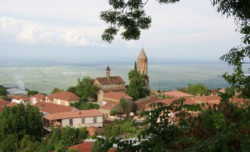 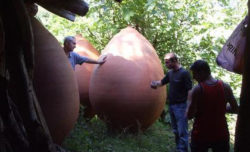 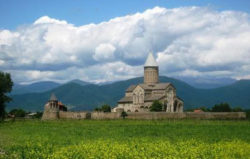 It is certainly the case that wine freaks, sommeliers and producers who are especially interested in authentic wines are talking about amphora wines far more than their actual economic importance would justify. Yet more and more ambitious producers are viewing the trip 'back to the roots' of wine as being more than just an interesting pastime. There are also star vintners such as Josko Gravner, who gathered his first experiences as a pioneer of Qvevri at the turn of the millennium, and who now focuses on nothing else – and who regularly wins the coveted 'Tre bicchieri' distinction in the Italian bible of wine, Gambero Rosso.

"The amphorae affect wine in the same way that amplifiers do music," explains the quality fanatic from Friuli, "good flavours become even better, while poorer ones become poorer." Gravner's bottom line on modern oenology: It has helped him to understand why the old winemakers were right – otherwise it would not be of any relevance to him today. It was not just Josko Gravner who therefore felt validated when, on 4 December 2013, traditional winemaking in the Georgian Qvevri was recognised by Unesco as an intangible cultural asset for being the oldest winemaking method in the world. 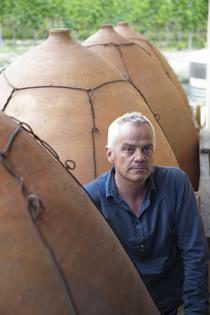 The Georgians have been pressing their 'Ghvino' according to customs that have been handed down over thousands of years. The amphorae are buried in the soil and mostly have a capacity of between 1,000 and 1,500 litres and their walls are thin and made from fired clay. They are roughly three quarters filled with mash and must, frequently including the stems and stalks, and without distinguishing between red or white wine. The fermentation starts spontaneously and the cap is circulated three to four times a day. Once the fermentation is over, the opening is covered with a piece of wood or slate. Leaves from different trees are then placed between the rim of the Qvevri and cover, and the opening is sealed with damp clay in which a pipe is also fitted to allow the carbon dioxide to escape.

The must is usually left to itself until March, and therefore becomes clear in the natural way. After the initial racking, the wine usually spends some additional months in another amphora; prior to the next vintage it is then distributed to several small Qvevri for storage purposes and sealed, sometimes for many years, before being opened on such special occasions as a son's marriage, or other important celebrations.

Cleaning the insides of the amphorae, which are usually coated with a thin layer of beeswax, is not such an easy task: The only utensils allowed are warm water and a brush, along with herbs of antiseptic effect, for scrubbing the inside walls. Yet that can only be done after having found one's way inside the narrow vessel first... 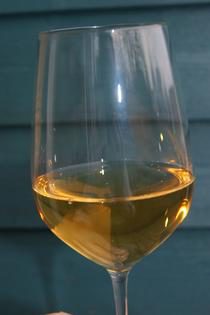 In antiquity, the amphorae in the style of the Qvevri, which were first used in the South Caucasus and Anatolia, spread around the entire reaches of the Mediterranean. The ancient Greeks called them 'Pithos', the Romans 'Dolium', in Spain they are known to this day as Tinajas – which mostly have a maximum capacity of 400 litres, have somewhat thicker walls, and are not necessarily buried in soil. The Qvevri remained the sole winemaking method in the Caucasus until well into the 20th century, and for Georgian farmers, their 'Marani', the wine cellar, is both a sacred place and the centre of their home. John Wurdemann is an American painter who has been living in Kakheti, eastern Georgia for over ten years, and who, as the proprietor of the 'Pheasant's Tears" vineyard, produces excellent wines.

He estimates that around 100,000 families continue the age-old tradition of making their own wine in amphorae. Wurdemann believes the number of professional producers, however, is only about twenty. The secret of good Qvevri wine? – "As few interventions in the vineyard and cellar as possible, and healthy grapes which are not overripe. Nature does the rest."

Around two thirds of the Qvevri production is accounted for by white wines from autochthonous varieties of grape such as Rkatsiteli, Mtsvane and Kisi. The wines, characterised by their tannin and with their unusual flavours, often present a real challenge to unseasoned noses and palates. "You either like the oxidative style or you hate it. There does not appear to be anything in between," claims German wine critic Manfred Klimek. Dr. Dakishvili, who is regarded as something of an authority on Qvevri culture, and who with German businessman Burkhard Schumann produces some of the best wines from Kakheti, loves his unaltered wines, produced in the traditional way, and which do not fit into any particular category: "The white wines in particular are very intense, and much more complex than normal wines. They are also richer in flavour, have a good structure and have up to fifteen times more polyphenols. They have an ageing potential of 40 to 50 years despite no addition – or only the minimal addition – of sulphur." 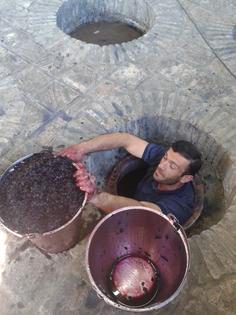 It can therefore come as no surprise that an increasing number of European vintners have decided to make the journey to the soul of wine. Such was the case with two friends, Giambattista Cilia and Giusto Occhipinti. They began producing wine with their first amphorae from Spain in September 2000, and they now have 150 to call their own in their new cellars in Vittoria (Sicily). It is a similar story with organic-dynamics expert Elisabetta Foradori in Trentino, who produces local vintages such as Teroldego and Nosiola in seventy amphorae, and who finds that the wines are "simply cleaner and clearer in their flavour," and also with Stéphane Bannwarth of Alsace, who even produces Gewürztraminer from the amphora.

In Austria, Bernhard Ott, with his Qvevri Veltliner, as well as Styrians Sepp Muster and Ewald and Andreas Tscheppe are seen as being the leaders of the new wave, while in Switzerland, the same can be said of Amédée Mathier from Salgesch in Valais. Mathier says that he came to the Qvevri "completely by chance" on a trip to Georgia in 2008. His path to success with it, however, certainly proved to have its ups and downs: The first vintage of his red wine, from Cornalin, ended its days being used as vinegar and as a base for schnapps, and four amphorae ended up damaged beyond repair. They have now been replaced, to be joined by a further nine.

The white wine from Rèze and Ermitage was a success right from the start however, and was also described by visiting journalists Fabian and Cornelius Lange from 'Zeit' newspaper as being "absolutely spot on.". Perhaps it is because they are so completely unusual and are undeniably so far away from the mainstream that Amédée Mathier loves his unaltered Qvevri wines so much. Its style is "something that is not really compatible with the majority, unfiltered, pure hints of oxidation, orange in colour – above all else, fascinating in the current Coca-Cola world!" Considerable effort is needed to bring these wines to everyday buyers, however.

In Germany, it is also primarily organic vintners who have been daring enough to rise to the challenge of amphora wine. In 2005, leading Rheingau company Peter Jakob Kühn brought two Spanish Tinajas to Oestrich-Winkel for experimentation with a small amount of Riesling grapes from the vineyard in Lenchen, because he was "excited by the fascination of the pristine, of the original." His second attempt in 2009 was also a success, although the wine required a long period of maturation after the alcoholic and malolactic fermentation. For its creator, the unfiltered end product has a "fascinating charisma and density – even if the Riesling that is produced in this way does not have the usual dominance. "

It is a similar story for organic vintner Manfred Rothe from Nordheim, who filled his first two Qvevris with a Silvaner and red wine mash in October 2013, and who now uses bulbous amphorae from the Caucasus at the Bavarian Institute for Viniculture and Horticulture (LWG) in Veitshöchheim, Germany. As part of a students' project in 2011, Johannes Burkert and Dr. Michael Zänglein, from the subject area of oenology and winemaking techniques, buried a 900 litre clay vessel in the soil and constructed a kind of Marani around it.
As part of a workshop on the subject of ‘Orange Wines’ that took place just before Christmas 2013, the first products from the 2011 and 2012 vintages were made available for tasting – in a comparison with other LWG experimental wines including, for example, unaltered wines from the Tinaja and amphorae of Bernhard Ott, Amédée Mathier and the highly acclaimed Bassermann-Jordan vineyard in the Palatinate, which dared to attempt a cuvee from Pinot Gris and Gewürztraminer for the first time in 2011. As summarised by Dr. Zänglein: “The flavour of this wine naturally polarises opinions, but that is intentional. There are more and more connoisseurs who want to get away from uniform, mass produced wine.”

A little like an irony of fate, however, it would appear to be the case that despite the increasing demand for Qvevris in Georgia, there is almost nobody left there who is an expert in this age-old craft. Just five old men – two of whom live in the village of Vardisubani in Kakheti, and three in Shrosha, Imeriti, in the west – profess to understand the art of the production process. They have no successors. For this reason, together with the society for the preservation of crafts ‘Xeloba Kartuli’ (www.kvevri.org), some winemakers are now trying to raise funds for opening a new school for Qvevri production. If they fail to succeed the journey ‘back to the roots’ will meet a premature end – only just after it has begun.