Tuscany of the Orient 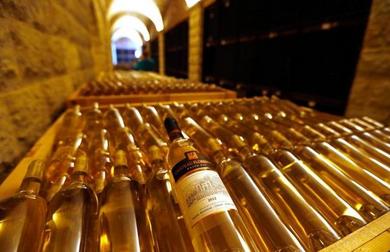 MAJD AL-MAOUSH, Lebanon: The Chouf mountain area, southeast of Beirut, draped with picturesque vineyards where high-end wines could be produced, can plausibly aspire to become the “Tuscany of the Orient.”

It is these words that Roger Yaghi, an entrepreneur and wine producer who established the first winery in the Chouf in his home village of Majd al-Maoush more than 10 years ago, used to
summarize his vision for the area, which he said could become as renowned for its wines as Italy’s Tuscany and France’s Bordeaux.

Yaghi’s ultimate aim is that the word Chouf should add prestige to a bottle, in the same way as the word Bordeaux does. “Why not have the designation of great wines of the Chouf on the brand label, the same way French wines are designated as Grands Vins de Bordeaux?” Yaghi asked, explaining that in order to earn the nomination, all the grapes used in the production of Chateau Florentine should be cultivated in the Chouf. «Cultivating the land reinforces the people’s attachment to their home and roots» Hunting for land that could be suitable for cultivating his vineyards is an urgent item on Yaghi’s viniculture agenda. He has approached farmers and landowners with a project to encourage the cultivation of grapes in the Chouf, under which he would provide capital, grape plants that are specially imported from France, Italy and Spain and the know-how, in return for quality grapes.

Yaghi said he would be seeking long-term agreements extending for at least 30 years to ensure uninterrupted supply of grapes.
“Farmers would be growing grapes under the supervision and instructions of our technicians and agricultural engineers,” Yaghi said, adding that such a venture would pump in capital and invigorate business activity in the laid-back region, which enjoys history, beauty and a preserved environment, a combination of factors that make it an attractive destination for tourists and wine
lovers.

“It is interesting from a marketing aspect to produce wine in a region with all those qualifications. In addition to producing good wine and making money, we would be promoting the Chouf area and its many touristic and ecological sites through the distribution of our wine,” Yaghi said, in reference to the Cedars’ Forest in Barouk and historic palaces in Beiteddine and Deir al-Qamar.

Yaghi said he planned to build a small hotel and a restaurant in the winery in Majd al-Maoush, a move aimed at boosting oenotourism, or wine tourism in Lebanon. Oenotourism is not limited, as many believe, to wine tasting and visiting wineries, but it is a great way to learn about the people, culture, heritage and customs of the area in which the wine is produced, Yaghi said.

The Chouf, an area of 500 square kilometers from the coastal strip of Damour to the cedar mountains in Barouk, as high as 2,000 meters above sea level, offers diverse terrain suitable for
agriculture.

Adnan Boustani, a farmer and landowner in Barouk, was approached by Yaghi for land leasing. He said the entrepreneur had taken samples of the soil from his plots for testing to check its suitability for planting the wine grapes. “There is a lot of arable land that has been neglected and left barren for years because landowners do not have the means to cultivate it. With Mr. Yaghi’s project they will have an opportunity to plant their plots again,” said Boustani, who has more than 100,000 square meters of land he is hoping to exploit. He pointed out that the hilly terrain necessitates the construction of terraces, a costly endeavor for the farmers, who would be happy to see their plots developed into a cultivable area.

“In addition to that, cultivating the land reinforces the people’s attachment to their home and roots, improves the environment and makes the area greener,” Boustani said. He explained that growing wine grapes was a relatively simple process and did not require a lot of water resources, as the young shrubs needed to be irrigated only in the first three years after planting.  “Moreover, grapes are easy to take care of, because they are not vulnerable like other plants, which may carry many diseases, and they do not require as much attention and follow up,” Boustani said.

For Jamal Hassan, another landowner approached by Yaghi in the village of Batloun, not having to worry about marketing the crop is an incentive to join the venture. “Large plots of land are left uncultivated and barren. We need someone with a private initiative to exploit these territories, especially since the agricultural sector has deteriorated dramatically in the last decades in the absence of an effective government support to the farmers,” Hassan said. “Yaghi is working for his interest and at the same time serving the interests of the farmers who own the land but don’t have the means to exploit it. It is a mutually beneficiary venture.”

Chateau Florentine’s vineyards occupy an area of 36 hectares (360,000 square meters) on rolling hills in Majd al-Maoush, a picturesque village nestled in the heart of the Chouf some 1,000 meters above sea level. The winery is currently producing 500,000 bottles annually, offering three different types of red
wine, two varieties of white and one rosé.

“For the past two years our wines have been produced from locally-grown grapes,” the winery’s technical director Hiba Salloum said, as she oversaw the unloading of crates of freshly picked grapes on the last day of harvesting. She explained that the first wines had been produced from a mixed blend of local and imported grapes brought from the Bekaa Valley. But as the young vineyards started giving full crops on the sixth year after plantation, there is no longer need to buy grapes from the Bekaa.

“Our production target is 1 million bottles per year, in addition to having another million in stock in the cellar. That is why we are planting new vineyards in the region, hence the need to find more land,” said the energetic young lady, who acquired her viniculture education in France’s wine cradle Bordeaux.

Lebanon has an increasingly vibrant wine-producing sector with over 40 wineries at present – up from just five in 1995. Production is expanding rapidly, and having gone through a period of dramatic rebirth, Lebanese wine is becoming better known and sought after.

In the meantime, Yaghi is gearing up for the public launch of his wine by the end of 2014. He said Chateau Florentine would be available in selected wine shops, including two outlets affiliated with the winery.

“Our wine is that of the Chouf mountain. The most important thing is that the region’s farmers collaborate with us and show patience,” Yaghi said.