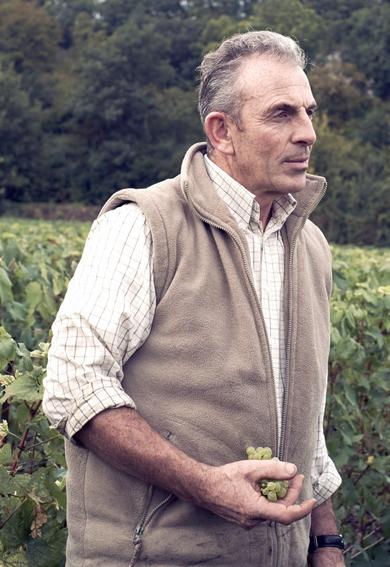 François Vallois has always known that he wanted to be and that he would be a winemaker. He learned the craft of winemaking while still a child and became involved with the vineyard at an early age. His grandfather André and his father Emile sold their own grapes to the champagne houses through the local cooperative. With the history of vineyards in his blood, François attended the school of viticulture until 1979 and since 1982 has passionately nurtured and cultivated his vines and fine grapes that resulted in the 2011 creation of HATT et SÖNER. He is married to Brigitte and has two daughters.

The philosophy that François applies to his winemaking is to make a champagne with a high degree of freshness, finesse and elegance. François is careful and extremely focused on quality, and he is present during every step of the production process to guarantee that the methods being used are of the highest class and that they are environmentally-friendly and in keeping with the time-honoured traditions of fine winemaking.

In the 19th century Leon Vallois, the great-grandfather of François Vallois married a daughter from the Moncuit family. The couple were both born and raised in Bergères-les-Vertus. Leon, a miller by profession raised four children on land ripe for agriculture that contained several acres of vineyard vines.

In the mid 19th century phylloxera, a parasite was inadvertently imported into France. The epidemic, known as “The Great French Wine Blight” reduced the total area of French vineyards by half. The epidemic spread through the champagne vineyards for several years with grafting onto rootstock found to be one of the only effective remedies. This later became known as the reconstitution of many vineyards as the wine industry in France slowly began to recover.

However the challenges of champagne were not over as the Champagne Riots erupted in 1910 and 1911 as a result of a series of problems and frustrations faced by the grape growers of the region, whose livelihoods depended on the Champagne production houses who purchased their grapes.

During this challenging period, in 1921, Leon Vallois gifted some parcels of grapevines to his eldest son André Vallois. André Vallois who married Renée Bouchez was also fortunate to own several acres of grapevines. During World War I, André was wounded and returned home to begin cultivating the vineyard that would later see much success. André and Renée purchased a farm in 1924, having been blessed with a single heir, their son, Emile Vallois.

Finally, in 1927, the Appellation d’Origine Contrôlée standards for the Champagne region were agreed upon. The regulations declared that geographical boundaries of the region included the Marne, The Aube, and parts of the Aisne departments; and that only grapes from those regions could be used in the wine now known (and loved) as “Champagne.”

It was after these many threats to the champagne industry that André Vallois, who was known for his bravery and nicknamed “Le Bras de Fer”, or the “iron arm” as his arm was reconstructed in steel after his injury during the war, began purchasing multiple small parcels of land and plant vines. In 1956, when the father of François Vallois decided to settle, their farm consisted of three acres of vineyards and 40 acres of agriculture and crops. The farm was beautiful and bountiful and François Vallois’ parents continued to enlarge the farm. Francois Vallois’ father and grandfather sold their grapes to the champagne houses.