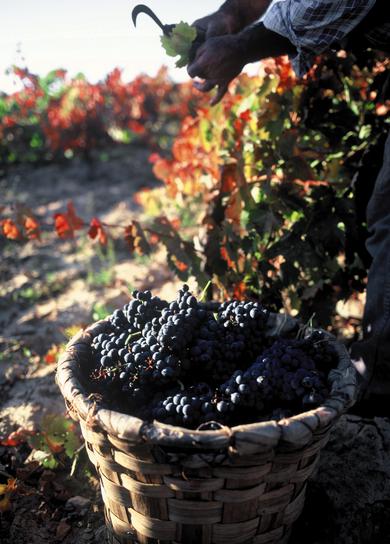 The Control Board reported the end of normal harvest in the wine region on Tuesday, 13 October, an unusual date which makes this vintage the earliest remembered in Rioja. While final assessment is pending devatting, initial results are very positive both quantitatively and qualitatively. This is partly due to the weather in September, which was exceptionally good for grape quality. A total of 441.18 million kg grapes were picked this year of which 426.70 million kg were approved after discarding excess production. These were used to make 300 million litres of D.O. protected wine. The Rioja grape harvest usually peaks on or near the feast of Our Lady of El Pilar on 12 October but this year practically all the vineyards were picked out by that date. One of the most curious facts about the 2015 harvest is that it took place practically simultaneously across the region with the bulk of the grapes being picked within a four-week period. Normally, the harvest is carried out gradually over nearly two months, starting at the beginning of September in the earliest eastern areas and finishing in October in the areas at the highest altitudes. After the mid-September ripening poll, the Control Board Technical Service reported that there were "harvest-ready grapes in all of the Region’s areas," and recommended "selective picking, regardless of vineyard location," because ripening rates depended less this year on location than on other factors, such as production load. Good weather throughout the growing cycle provided excellent canopy growth and grapes in top condition, free of pests or disease. The weather also helped balanced ripening across all vineyards, and unhurried, selective picking. The 2015 harvest brought top quality grapes as a whole, arriving in perfect condition with analytical results which are very suitable for making excellent wines, with an average alcohol content slightly above normal figures. Quality was particularly outstanding in vineyards located in cooler areas with moderate vigour and limited production, often yielding considerably less than the maximum allowable kg/ha rates. Lower berry weight due to a dry spell during the last part of the growing cycle also had a very positive impact, with a better skin-to-pulp ratio —a key quality factor. The Control Board will soon start the approval process —which involves laboratory tests and tastings— to accurately rate the new wine. Total grape production surface area in the region for 2015 was 61,870 hectares, 334 more than the previous vintage. Of these, 57,861 hectares are planted with red grape varieties and produced 392.98 million kg, while 4,009 hectares with white grape varieties yielded 33.72 million kg. This production is a little higher than last year’s but less than the maximum yields per hectare authorised for this campaign (6,955 kg/ha for red grapes and 9,360 kg/ha for white).