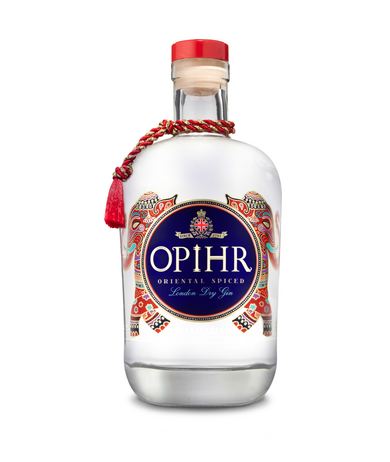 The heritage of Opihr Oriental Spiced Gin is firmly rooted in the Ancient Spice Route. Traditionally merchants would travel thousands of miles along the route, trading exotic spices and botanicals from distant lands. Opihr’s hand-picked botanicals epitomise the exotic intensity of the Orient, with spicy cubeb berries from Indonesia, black pepper from India and coriander from Morocco.

Opihr - pronounced {O-peer}. Opihr is a legendary region famed for its wealth and riches which prospered during the reign of King Solomon. The King regularly received cargoes of gold, silver and spices from Opihr and whilst its exact location remains a mystery, it is thought to have been in the Orient, along the Ancient Spice Route.

The botanicals in Opihr Gin make the journey to their final destination, the oldest distillery in England, where quality gin has been traditionally distilled using the same London Dry Gin method since 1761. The Master Distiller then infuses the botanicals in high quality spirit in copper pot stills, using over 250
years of tradition and expertise, to create a unique spiced gin.

Nose: A rich Oriental spiced gin with a smooth perfume and sharp bursts of citrus. Key notes of cumin and cardamom provide a warm earthy background balanced with the grapefruit peel.

Taste: Soft camphor, some sweetness and oriental spices create a warm mouth feel that lingers but does not increase in intensity.

Opihr Oriental Spiced Gin makes a refreshingly different Gin and Tonic garnished with orange for a classic drinkand for the more adventurous, mix with ginger ale or in a Red Snapper, a gin-based Bloody Mary.

Opihr Oriental Spiced Gin is available in Tesco, Morrison, Waitrose, Ocado, Booths, seven regional Harvey Nichols stores nationwide and 31Dover.com. Opihr is available in bars and restaurants throughout the UK including All Bar One bars, Nicholson’s pubs, Mr Fogg’s, China Tang and Dishoom in London
and Chaopraya Restaurants in the North of England.

Opihr has won 7 international awards since 2013, including a Gold Medal at the San Francisco World Spirits Competition and the highest award of Master in The Gin Masters.
RRP £23.00 for 70cl ABV 40%