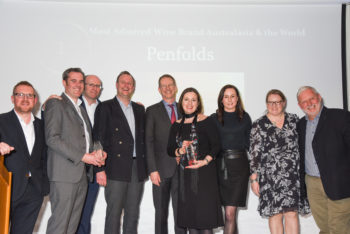 The announcement was made lastnight (March 17) at the special awards evening held at the Steinberger Parkhotel in Düsseldorf, on the opening day of Prowein, the wine world’s premier event.
Drinks International has announced its highly anticipated results of The World’s Most Admired Wine Brands survey, conducted in association with market research specialists, Wine Intelligence.
The brands were chosen by the Drinks International’s Academy of global drinks buyers and specifiers, including many wine professionals, from 48 countries.
Penfolds, which is Treasury’s flagship Australian wine brand topped the poll, having won it 4 years ago in 2016. It was followed in 2nd place by former winner leading Spanish producer, Torres, Villa Maria in 3rd place and previous winner Chile’s Concha y Toro in Fourth. France’s M. Chapoutier is always ever present in the list at position 5.
Representatives from the world’s leading wine brands were at the awards evening at the Steinberger Parkhotel hotel in Düsseldorf, along with wine buyers, distributors and industry professionals.
The awards are the result of an international industry survey conducted by Drinks International, the leading magazine for the global drinks industry, in association with Wine Intelligence, the specialist market research company.