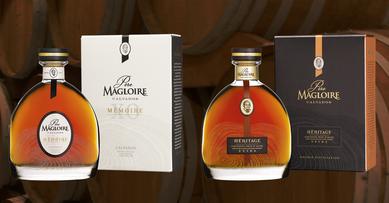 Père Magloire is launching an exclusive range of two superb Calvados, Mémoire XO and Héritage Extra in celebration of the effects of the passage of time on apple brandy originating from the Normandy region of France. Thus, we are invited to rediscover the finesse and subtlety of these fruit brandies, an original alternative to the more usual brown spirits.Such beautiful memories

Mémoire XO has been blended from both single and double distilled Calvados with a minimum of 15 years of aging. Each of the constituent eau-de-vies (brandys) are aged individually, carefully selected and combined with the resulting blend then placed in casks to await the gentle passage of time and all its benefits. This process has given birth to a reddish, amber nectar, with elegant woody notes evoking memories of vanilla and ripe apple and complimented by highlights of leather, cloves and black peppercorns. On the palate we rediscover memories of desserts composed of dried and candied fruits (oranges, apricots and nutmeg) along with more mature spicier notes, which leave behind a powerful, sophisticated and very particular flavour.
To be served neat or on ice.

Héritage Extra, the age of reason.

This is also the coming of age of an art that has reached its summit in creating this Calvados with its beautiful brown and amber robe. Its magnificent colour stems from the union of eau-de-vies aged for 20 years and over, originating exclusively from the Pays d’Auge region (A.O.C) and having undergone double distillation in traditional pot stills.
Following traditional methods dating back over two hundred years and keeping in mind the debt owed to past experience, Héritage Extra is however, not only the fruit of inherited knowledge but also an original oeuvre, which clearly bears the hallmarks of its creator Jean-Luc Fossey. His own techniques and intuition are married with those of the past and have given birth to a bouquet of exceptional richness and smoothness. Notes of liquorice, oak bark and caramelised apple immediately seize the nose. The palate develops scents mixing the sweetness of apple with grilled almonds. Featuring a wealth of delicate flavours, Héritage Extra has extraordinary staying power in the mouth and is true to all the promise conferred by its name. To be served neat, naturally.