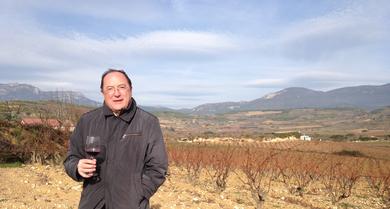 GRUPO MATARROMERA enters the Qualified Denomination of Origin Rioja by acquiring a new winery. Situated in the town of San Vicente de la Sonsierra, in the hearth of Rioja Alta, this new winery aims to be converted in one of the wine references in a region where excellence and quality are vital signs of its identity, both in the production methods as in its renowned wines.By history, for tradition, for quality and for market share, this D.O. represent a business card of Spanish wines worldwide.
The D.O. Rioja is a prestigious label that incorporates this new winery after a long process of analysis and implementation.After more than two years of exploration and searching excellent terroirs and vineyards, the wine group reached the town of San Vicente de la Sonsierra, where a new benchmark in the region will be created by Carlos Moro, one of the most respected wine makers of the national and international wine sector, renowned for his wines and his commitment to innovation, sustainability and business diversification.
The figures of the new wine project
For this project an inversion of more than four million euro was needed, which has been financed mainly with equity investment.An investment that will allow an immediate completion of the work that the team of enologists of Grupo Matarromera has been developing concerning the conception of wines which will be commercialized in the last trimester of 2015.To achieve this, there will be started with an immediate inversion and actualization to improve the winery, with the objective of having the maximum technology for the elaboration of wines with international prestige. The project permits Grupo Matarromera to expand its wine making business to eight wineries, of which seven are located in Castilla y León and one in La Rioja, and will extend its presence to six Denominations of Origen( Ribera del Duero, Toro, Cigales, Rueda, Vino de la Tierra de Castilla y León and Rioja). All this in only 26 years of activity.This way, if forecasts are met, the new winery will invoice close to one million euro in its first full year of activity (2016), and Grupo Matarromera will obtain sales superior to 22 million euro, becoming one of the leading wine groups in Spain.
The winery

The new winery, of which the commercial name is still being looked for , is a project organized by Carlos Moro and a team of enologist responsible for the selection of excellent vineyards on the left bank of the Ebro River with its epicenter in San Vicente de la Sonsierra, and which constituting the starting point for wines that aim to be in the elite of the Qualified Denomination of Origin Rioja. The winery has 4 hectares of own vineyards and another 20 ones managed by Grupo Matarromera.The winery is located on a hill with great views on the town and its surroundings, which exist of great scenic and cultural wealth. Its location and its design, with different levels between the different units of elaboration (aging, bottling and shipping) allows the handling of the grape and the movement of the wines by gravity.The underground corridors with a surface of more than 1.200 m2, with a capacity for over 2,000 barrels, allow natural and homogeneous aging throughout the year because of the optimum temperature and humidity conditions, regardless of weather conditions outside, without dependence on industrial refrigeration equipment and / or air conditioning.
Grupo Matarromera will also invest in the acquirement of enological machinery of the latest technology for the production of high quality wine, with techniques such as the automatically "bleeding" of the wine and the separation of the stems from the grape skin without braking them, which permit to improve the process of winemaking for limited and exclusive productions.Moreover, joining tradition and modernity, some of the fermentation processes will take place inconcrete deposits, covered with isolation material. All this combined with the technical knowledge and passion of the team of enologists of Grupo Matarromera, as well as the exciting challenge of making wines of the highest quality in the well known D.O. Rioja.At the same time Grupo Matarromera is evaluating the investment in a system that could take advantage of the humidity and the temperature of the underground corridors, so that these low temperature can be used in the rest of the rooms of the winery. All this will contribute to the philosophy on sustainability and the protection of the environment.
The winery will also be opened for wine tourism, becoming a close and accessible reference for visitors and tourists, in a region used to promoting wine culture for decades. It forms the backbone between two regions, between two rivers which, flowing in the opposite direction, lead to the same destination: a market accustomed to the requirement and the excellence of its wines, motif set with humility, simplicity and professionalism, the principal and noble goal of this new Rioja winery.In the exterior of the winery a red grape variety garden with the varieties authorized by the D.O. Rioja (Garnacha, Mazuelo, Graciano, Tempranillo and Maturana tinta) will be created. Furthermore there will be invested in adapting the winery for wine tours by realizing a shop with wine bar, tasting room and the establishment of a panoramic elevator from which you can admire the wine production process.
Grupo Matarromera in numbers
With the acquisition of this winery in D.O. Rioja, Matarromera takes a strategic and qualitative leap in its intention to become a national reference in winemaking at its finest. The company founded in 1988 by Carlos Moro itself is now a business group that closed 2013 with a turnover of over 18.6 million euro.The seven wineries scattered throughout the banks of the Duero River currently employ 150 people directly and about 80 indirectly in 22 municipalities of Castilla y León, mainly in the provinces of Zamora and Valladolid.The project bases its exponential growth in its commitment to the vineyard (with over 500 hectares, one of the largest owners of vineyards in Castilla y León) and especially in research, investing over 40 million euro in different R & D at the international wine forefront in the last ten years. These investments already resulted in pioneering products such as the first non-alcoholic wine high end of the world (Eminazero), the polyphenolic extract Eminol, which is also internationally patented, and the line of high-end cosmetics Esdor.