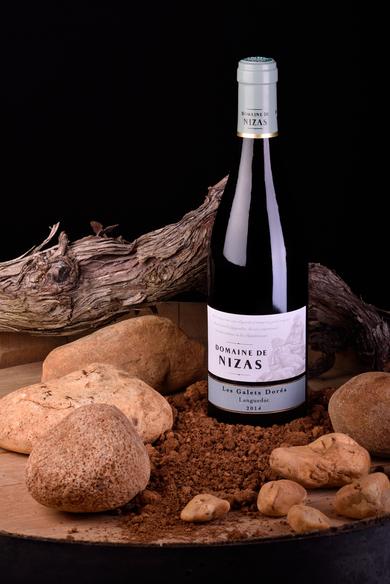 Domaine de Nizas looks forward to welcoming the international wine trade to the Vinisud wine fair this month, with an extensive range of wines available to taste. Conﬁ rming its commitment to providing both the trade and consumers with something different and original, Domaine de Nizas will be showcasing its exciting new range during Vinisud (Montpellier 15th to 17th February), including a new cuvee Les Galets Dorés 2014, which will be shown at Vinisud for the ﬁrst time.

Les Galets Dorés 2014 is the latest creation of winemaker Nathalie Arnaud-Bernard, who joined the estate in 2011 as technical director. Produced under the Coteaux du Languedoc appellation, the wine is a heady blend of Grenache and Carignan, two varieties which ripen to perfection in this corner of the Languedoc. “The wine’s aromatics are simply magniﬁ cent,” says Nathalie. ‘The nose is a complex mosaic of garrigue, blossom, fennel and coriander, it’s the quintessential scent of the Mediterranean in all its intensity.” Terroir management, and the desire to match the right variety to a speciﬁc place, has been the overriding philosophy of this estate from the outset. Founded in 1998 by entrepreneur John Goelet, Domaine de Nizas boasts a remarkable diversity of terroir, situated above the medieval town of Pézenas on a plateau with three geological proﬁ les: limestone, basalt and Villafranchian soils (river pebbles), protected by two spurs of basalt. At this rich geological crossroads, Goelet’s trusted adviser, the legendary agronomist and œnologist Bernard Portet, led the project to select and plant the grape varieties which would be most suitable for each individual block. After an extensive period of research, Portet decided that two-thirds of the existing vines were unsuitable for the terroir and so they were pulled up, reducing 48 hectares to 16. Today, the estate cultivates an array of varieties most suited to the Languedoc terroir across around 40 hectares, namely: Mourvèdre, Syrah, Grenache, Cabernet-Sauvignon, Petit Verdot, Sauvignon Blanc, and Viognier. Since her appointment at Domaine de Nizas, Nathalie Arnaud-Bernard has made terroir cultivation her top priority and has continued to build on the original replanting work led by Portet, who re-mains involved as technical advisor. Her respect for nature and sustainable approach to the vineyard – ploughing, grass co-vering to foster the biodiversity of the soil, hand-sorting of the grapes – has brought signiﬁ cant improvements to the wine qua-lity. Arnaud-Bernard is passionate that great wines require great grapes and absolute attention to every detail in the vineyard and winemaking process. Domaine de Nizas, under the care-ful stewardship of Arnaud-Bernard and her team, now offers 3 distinct ranges. Its core Mosaïque range is made up of red, white and rosé Coteaux du Languedoc PDO wines, each com-posed of three grape varieties grown in three distinct terroirs. The estate’s ﬂ agship is the Expression range (Languedoc-Péze-nas PDO), where only the ﬁ nest grapes from distinct blocks are blended to create aromatically complex and structured wines. Domaine de Nizas also offers an approachable entry level se-lection, known as Le Mazet (Pays d’Oc PGI).

About Domaine de Nizas:
Born into a family of Bordeaux wine merchants, John Goelet has led the vanguard for terroir-focused wine-making across several international regions, including Clos du Val in Napa Valley and Clover Hill in Tasmania. He established Domaine de Nizas in 1998. With the oversight of Bernard Portet and since 2011 the extensive winemaking skills of Nathalie Ar-naud-Bernard, Goelet is now achieving his ambition of crafting individually tailored wines from the rich mosaic of terroirs above Pézenas. Above all, Goelet has given Arnaud-Bernard the free-dom to make wines with authenticity and reﬁ nement, the end result of which is a collection of inimitable wines that burst with personality and express their unique terroir.