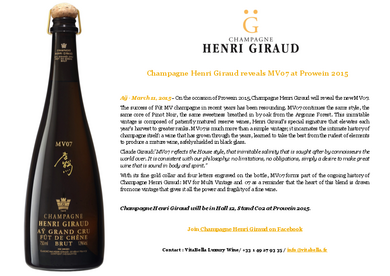 The success of Fût MV champagne in recent years has been resounding. MV07 continues the same style, the same core of Pinot Noir, the same sweetness breathed in by oak from the Argonne Forest. This inimitable vintage is composed of patiently matured reserve wines, Henri Giraud’s special signature that elevates each year’s harvest to greater ranks. MV07 is much more than a simple vintage; it incarnates the intimate history of champagne itself: a wine that has grown through the years, learned to take the best from the rudest of elements to produce a mature wine, safely shielded in black glass.

Claude Giraud:"MV07 reflects the House style, that inimitable salinity that is sought after by connoisseurs the world over. It is consistent with our philosophy: no limitations, no obligations, simply a desire to make great wine that is sound in body and spirit.”

With its fine gold collar and four letters engraved on the bottle, MV07 forms part of the ongoing history of Champagne Henri Giraud: MV for Multi Vintage and 07 as a reminder that the heart of this blend is drawn from one vintage that gives it all the power and fragility of a fine wine.