Champagne Gardet : … a champenoise tale, in the heart of the Montagne de Reims … 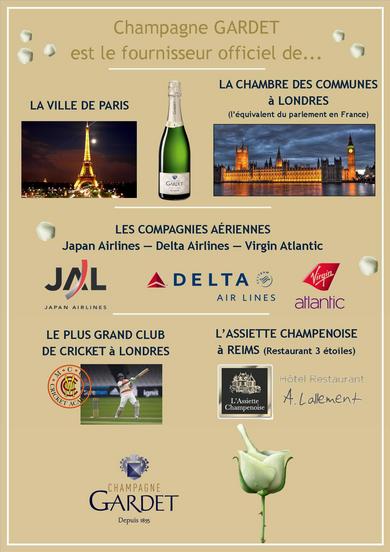 Champagne Gardet is a medium sized and familyowned

company that was created in 1895, when

village in the heart of the "Montagne de Reims", with a

brand, whilst continuing to supply wines of

To do so, he based his method on the secular

and a wine making process fully oriented toward

This purpose and the respect of tradition are still at the heart of the current owners’ preoccupations:

the PRIEUX family. Deeply attached to their roots, the Champagne region, the family has been working in

the arboricultural and agricultural sectors for years; passing on their love for their land from generation

to generation. These values have shaped the family spirit which is now perpetuated by Christophe

Champagne Gardet is the 20th House of Champagne (in volume), with an annual production of approx. 1

million bottles. About 50% of it is exported, mainly to Europe (Great Britain, Belgium, Germany ...), and

There are 9 different champagnes in the complete range, produced in the most traditional way, using

only "cuvée" (first juice from the pressing). The greatest care is taken to produce high quality products

requirement) and by being one of the few Houses still using oak barrels to age part of the reserve wines.

Champagne Gardet has been supplying several famous airlines in the past:

Among the prestigious customers are:

- the Alain Ducasse Restaurants in New-York

- the Balthazar in New-York

Maintaining the quality and character of its champagnes year after year,

even more finely every parameter of “méthode champenoise” winemaking...

between tradition and modernity – a balance that defines the Gardet style.