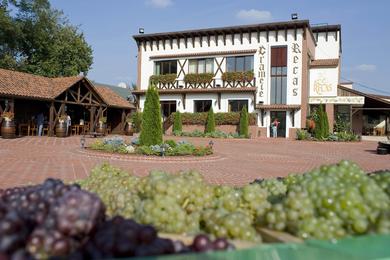 For the first time at ProWein in Dusseldorf, Cramele Recas will take its first solo position - at stand number J65 in Hall 15 – where the Romanian winery is to launch its partnership with premier German wine distributor Mack & Schuehle.

After investing 2.5 million euros in upgrading the bottling line and capacity of the winery, Cramele Recas will also be taking this opportunity to launch several of its new products including a premium dessert wine; a late harvest Sauvignon Blanc called Conacul Ambrozy, and a new Pinot Grigio Rosé under the Calusari label which will be the first wines by Recas available in a 187 ml size.

Cramele [literally 'cellar'] Recas is a premium 935 hectare wine estate located on the far western fringes of the Romanian region of Transylvania/Banat.

The winery includes entry level, premium and private ranges which are distributed globally and has now added to its distribution list by teaming up with German distributors, Mack & Schuehle, to release the its latest range of wines.

Philip Cox, Commercial Director and Shareholder, commented on the new partnership; “We’re thrilled to be partnering with prestigious German distributor Mack & Schuehle and excited about presenting the wines at our first solo stand at ProWein. 2015 is going to be an important year for establishing Cramele Recas’ presence in the German market and this partnership will help us to make the right impact. We are also working on several ranges of wine, specially tailored to the German market as we have done successfully for the Netherlands and UK markets”.

Mack & Schühle AG is one of the largest wine distributors in the Central European area with a turnover of 252 million euros (financial year 2013). Founded in 1939, Mack & Schühle celebrated its 75th company anniversary in 2014 and continues to be a family-run company. The company distributes international producer brands and ranges of wine in all price segments as well as innovative products originating from all major wine-growing regions worldwide. Mack & Schühle AG holds shares in producers and distributors in Italy, Spain and Switzerland. "Weinwelt" is one of Mack & Schühle AG's business areas and has its own range of international wines especially for customers in the hotel, restaurant and catering trade and specialised wine trade.

Philip and Elvira Cox will be available for interviews and tastings during ProWein. Please contact Clementine Communications to set up interview or receive more information.

Philip Cox is the Commercial Director and Shareholder along with his wife Elvira, who is also a Shareholder and Export Director

Cramele Recas was launched in 1998 and produces the biggest-selling Pinot Grigio in the UK, sold under various labels

Cramele Recas is Romania’s biggest exporter of bottled wine, and a major player in the domestic market

12,000 tonnes of grapes are used from the 935 hectares of vineyards

We serve customers from wholesale and retail, specialist shops, gastronomy and the HoReCa-sector

Find out more at www.mack-schuehle.de