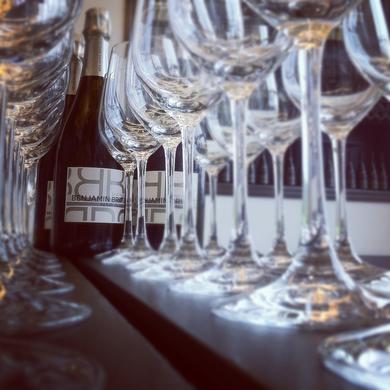 Wednesday, January 20, 2016 (Gaspereau Valley, Nova Scotia) – Benjamin Bridge is delighted to announce new international recognition for its sparkling wine program. San Francisco based wine writer, Alder Yarrow, founder of the highly influential Vinography.com, a go-to for wine enthusiasts and professionals throughout the wine world, highlighted Benjamin Bridge in his holiday blog on sparkling wine, stating it to be "among North America's most ambitious and serious winery ventures I've had the pleasure of encountering in years."

In addition to his Vinography.com blog, Mr. Yarrow is the author of several acclaimed wine books, including "The Essence of Wine", and is the North American columnist for famed British wine writer Jancis Robinson OBE, MW, publishing under "Alder on America" (Jancisrobinson.com).

In his blog, Mr. Yarrow highlights the international quality of Benjamin Bridge sparklings:

The most notable wines this week were a remarkable trio whose very existence deserves respect, regardless of their quality, which happens to be astounding....Established in the far reaches of Nova Scotia, these folks are making serious wines in the most marginal of conditions, with a dedication that is astounding....Well let's just say that those who have claimed these to be the best sparkling wines made in Canada couldn't possibly be wrong, as these wines can easily hold their own with the best of California and Champagne.

Benjamin Bridge Head Winemaker, Jean-Benoit Deslauriers, explains the importance of this recognition to its winemaking objectives:

Alder Yarrow's endorsement of our wine program is a really meaningful step for not only the growth of our winery, but also the Nova Scotia wine region as a whole. It is the recognition of key influencers like Mr. Yarrow that has the potential to place us on the international wine map. If Benjamin Bridge’s founding principle was to create international caliber sparkling wines by relying upon our unique micro climate, this international validation fuels our ambitions to even loftier heights.

Mr. Yarrow's column went on to review three Benjamin Bridge sparkling wines scoring them all an amazing 9 to 9.5 out of 10, including its 2008 Brut Reserve.

In late 2015, Benjamin Bridge released the follow up to this 2008 vintage, the 2009 Brut Reserve ($74.50), a cellar keeper available exclusively from the winery. It also released its first non-vintage sparkling, the Benjamin Bridge NV ($27.95), to overwhelming demand. The non-vintage draws upon the winery's library of wines spanning nearly 15 years, including blending components from its inaugural 2002 vintage. Available on-line through Benjamin Bridge, through NSLC stores and private wine stores in Nova Scotia, NLC stores in Newfoundland, and ANBL stores in New Brunswick, while supply lasts.

• Since 1999 the McConnell Gordon family has been working with a team of international winemakers to produce world-class sparkling wines and premium table wines in the picturesque Gaspereau Valley of Nova Scotia, Canada.

• In 2008 winemaker Jean-Benoit Deslauriers joined Benjamin Bridge’s winemaking team and, together with Peter and Raphaël, has crafted the sparklings, and also its signature white wine Nova 7 – widely referenced as Nova Scotia’s "iconic wine.”

• Nova 7 is a lightly sparkling, off-dry white produced by Benjamin Bridge, acknowledged by critics from coast to coast, as the maker of Canada’s finest sparkling wines. Made from 100% Nova Scotia grapes, Nova 7 is a proprietary blend of signature aromatic white grapes, highlighting select Muscat varieties, to create an unparalleled freshness, brightness and minerality.