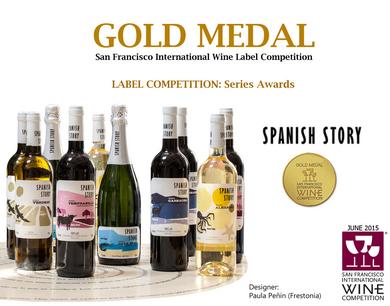 We are pleased to present you our GOLD Medal in the San Francisco International Wine Label Competition 2015.

This event is one of the most influential wine label competitions in America, with a very high level since its debut in 1980.

The 2015 Competition was held on June 12 through the 14th at the Hotel Nikko in downtown San Francisco. Among 152 entrants, Spanish Story Wines were awarded with a Gold Medal for the design of the entire series of labels “Spanish Story” created by the Spanish designer Paula Peñín.

The 2015 Label Design judges included Joel Blum of the San Francisco International Wine Competition, Thomas Gronbukt of the Academy of Art University, and Patti Mangan from Imagine That Design Studio.

Competition director Anthony Dias Blue, renowned food and wine authority and publisher, stated: “It is hard to believe that each year can improve upon the last, but it happened again this year.”