And Wine Company of the year is... 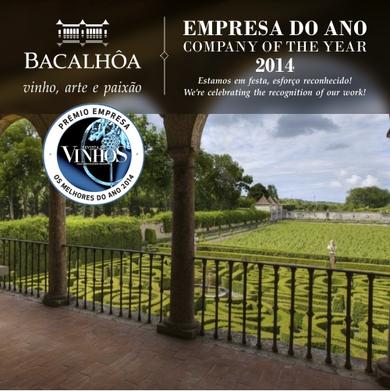 Bacalhôa Vinhos de Portugal was recognized as the Company of the Year 2014 in the wine sector by Revista de Vinhos the most important wine publication in Portugal.

For almost 20 years, Revista dos Vinhos monthly edition has been shaping wine consumers, enthusiasts and professionals. The focus on tastings, wine touring and wine regions for both Portugal and all around the world, is an incentive to all the wine producers in Portugal to produce great wines, year after year.

Last February took place the yearly Gala of Revista dos Vinhos, the most prestigious wine event in Portugal where this magazine distinguishes the Portuguese wine sector with the so called wine Oscars.

"In 2014, Bacalhôa Vinhos de Portugal introduced several new impressive wines, in almost every segment", emphasized Revista dos Vinhos. "With over 1200 hectares of vineyards throughout Portugal and a production capacity for over 20 million liters", Bacalhôa set the basis for the distinction as Wine Company of 2014.

Nowadays, the company is present in more than 40 countries, around the world, being distinguished annually with several international wine awards.