Apéro, aperitif, aperitivo, pre-dinner drink. Many languages today have their respective expression for what the ancient Romans already knew. In Latin, "aperitif" means "to open". And thus the modern aperitif today is able to enjoyably prepare the stomach for an upcoming meal and at the same time stimulate the palate. However, also apart from the meal times, a new way of enjoying sophisticated drinks can be observed before sunset, relaxed day drinking. Let us take a look at both phenomena, preferably with a nice drink in our glass.

For instance, vermouth, the most classic of all aperitifs. Historical sources from antiquity and the Middle Ages already refer to the long tradition of enriching and refining wine with herbs (or even using them to conceal inferior wine). Often associated with health-promoting hopes. Medieval healers prepared appropriate elixirs to counter headaches, memory weakness, jaundice or simply loss of appetite. It was hoped in ancient Egypt that the elixirs would have an aphrodisiac effect. Even today, the advice to take a herbal schnapps a quarter of an hour before eating can sometimes be heard. Herbs stimulate the activity of the digestive enzyme pepsin in the stomach.

Up to today, "Artemisia absinthium", the wormwood herb, which aromatises the wine and is the inspiration for the name of the genus, is an important component of the blends. The first commercial brand originated in Turin in 1786, when Antonio Benedetto Carpano's recipe enthused people. The new trend spreads from Italy to neighbouring winegrowing countries, with France in particular, but also Spain, Switzerland, Austria and Germany becoming high-quality producers of vermouth.

The diversity is immense. It ranges from red to rosé right up to white and from very sweet to dust-dry. For all of them, the production process involves adding sugar, spices, herbs or fruits to a basic wine and fortifying it with alcohol. In most cases, the vermouth is then stored in wood or steel before being bottled with an alcohol content of approximately 14 to 20% by volume. From 17 to 19 March 2019, ProWein, the world's largest trade fair for wines and spirits, offers plenty of opportunities to taste these filigree herbal delights in the form of vermouth or herbal distillate. Be it a vermouth from Cupf (Hall 7.0/C09), a herbal liqueur from HirschRudel (Stand Hall 7.0/A01) or a speciality from Roner (Hall 7.0/C38). And also a balanced aquavit, for example the "Linie" brand at the Arcus Norway stand (Hall 7.0/C25), can safely be considered to be one of our aperitifs. Just like a Leipzig absinthe from the Leipziger Spirituosen Manufaktur (Hall 14/B70). And a varied selection of aperitifs from sparkling wine to vermouth is also certain to be found at the Schlumberger stand (Hall 14/B92). However, particular attention will be paid to Italian exhibitors such as Dilmoors from Pedrengo (Hall 16/D68), whose bitters and aperitifs will immediately conjure up a longing for Spritz and Negroni. 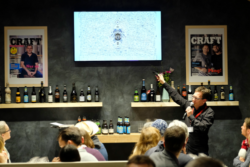 Other countries, other (drinking) customs

All around the Alpine region, the aperitif culture is still celebrated today as an everyday culture - from Spritz to Negroni, from pastis to aperol. And also for many people a carbonated beverage is an important part of their start into the evening. Thus it may also gladly be a sparkling wine or a craft beer. Or perhaps a long drink with spirits and a sparkling lemonade or bitter lemonade? The special show „same but different“ in Hall 7.0 picks up precisely on this spectrum of topics. Around 100 exhibitors from 22 countries will be presenting hand-picked craft spirits, craft beers and cider.

Further north, we encounter other drinking habits. Sayings like "No beer before four" are supposed to basically discipline our drinking. But what for? Enjoyment is possible and inspiring at any time of the day. However, customs change over the years. The post-war period was craving liquid pleasure. The series "Mad Men" clearly documents the US-American drinking behaviour. In the first episode, the new secretary is instructed in her duties: "Mr. Draper drinks Rye!" - "Rye is Canadian?" - "You better find out as soon as possible." The Koval Distillery from Chicago (Hall 12/D85), for instance, shows just how full of character individual types of grain, such as rye, can taste in whisky or whiskey. Classic American whiskeys can be superbly sampled at Heaven Hill from Kentucky (Hall 12/C84) or Lux Row Distillers from Missouri (Hall 9/A60). Until the 1970s, the “three martini lunch" was a common ritual with plenty of cocktails amongst American businessmen. Until Jimmy Carter denounced that custom during his presidential candidacy, and a new meritocracy condemned relaxed moments as ineffective.

Today, we are experiencing a counter-trend based on light alcohol and sparkling long drinks. Gin also plays a key role in this process throughout Europe. Although no longer in a powerful martini cocktail, but rather in a light gin & tonic drink. "Day drinking" is the invitation, which more and more bars pronounce as they open their doors quite early in the day to serve highballs, long drinks or spritz drinks to celebrate a new, enjoyable lifestyle. The producers of bitter lemonades are always coming up with new and exciting recipes, and with matcha, elderberry or reduced sugar they provide for variety in the long drink glass. Gerolsteiner (Hall 14/D70), for example, offers unusual fruit combinations with carbonic dioxide, such as lychee lime or mango-grapefruit.

Classic long drinks refresh and can taste quite complex. For example, the "Horse's Neck" with bourbon, angostura and ginger ale or especially a gin & tonic. The gin selection of ProWein leaves nothing to be desired, particularly in the special show "same but different", as the modern gin brands stand out from the crowd with their entertaining stories and unusual ingredients all around the juniper berry. Be it Elephant Gin (Hall 7.0/B40) with its African inspiration, Scottish Daffy's Gin (Hall 7.0/C01) with a hint of Lebanese mint and Blue Gin from Reisetbauer (Hall 17/B02C) with its balanced 27 ingredients and triple distillation, and last but not least Bathtub Gin from Atom (Hall 7.0/D05), which refers to the era of prohibition in the United States.

And where day drinking and a delightful aperitif form the prelude, the digestive is able to celebrate a perfect conclusion. But that is another story altogether.