Rioja – old Spanish nobility in tune with the times

A lot has been going on in Rioja. The traditional Spanish winegrowing region has changed which is reflected by a fascinating architecture. Modern vineyards appear like a symbol of the change from a very old wine style to very modern wines, which are made with a great deal of technical effort.

Like a gleaming crystal in the twilight, Baigorri floats weightlessly in an endless sea of vines. Of course, the effect is calculated, and you go into raptures a little and think of space ships and science fiction films. However, inside the glass cube, the main building of Bodegas Baigorri, gravity plays a leading role. According to all the rules of modern science, the grapes and all subsequent products are moved exclusively with the help of gravity. From the delivery to the top floor to loading the filled bottles, seven floors below. 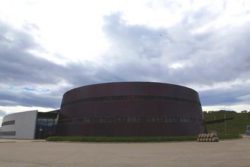 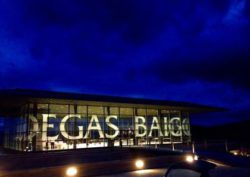 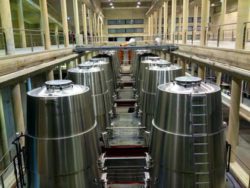 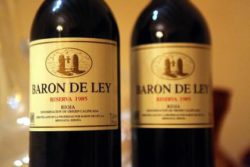 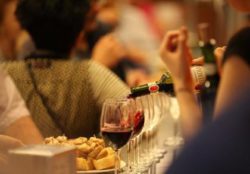 You can see this little miracle from kilometres away, and it is not the only building that catches your eye in Rioja, not by a long shot. The region in the North East of Spain is full of eccentric architecture. A building of Viña Tondonia in Haro looks like a lying down wine bottle. A few kilometres away, the Viña Real has made a monument with the giant version of a barrel sunk into the ground. On a hill, of course, so that everyone can see it from the country road. Naturally the interior is also impressive with a glass floor, through which you can see barriques full of Tempranillo arranged in a circle over several levels. Of course, you can also taste the wine in the restaurant. Unless you prefer one of the other restaurants at vineyards in the region. Architecturally, they all have their attraction.

The just 15 year old Bodega Ysios protrudes from the vineyard with its 200 metre long roof, made of oversized corrugated aluminium, and so contrasts with the silhouette of the mountain ridges on the horizon. The tasting room underneath is like a cathedral. A little further on in Elciego near Marques de Riscal, you dine under gold and pink titanium sheets, which are draped like an oversized ribbon. A student of Ferran Adrià works in the kitchen.
70,000 visitors per year can convince themselves that there is still a bottle of every vintage in the cellar, starting with 1862.

Each of these buildings tells its own story, cites materials and shapes in order to show what is particularly important to the owner. Their architects are amongst the best in the world. Overall, they want to say that Rioja is not just a traditional, winegrowing region. On closer inspection, they are even a symbol of the change from a very old wine style to very modern wines, which are made with a great deal of technical effort. 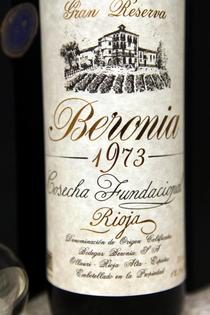 But that is a long story. It starts, like most European wine stories, shortly before the beginning of our era, when the indigenous peoples pressed the first wines. After the Celtiberians, whose name has nothing to do with pressing wine, came the Romans, and they made wine in great style. The turmoil of the Middle Ages set winegrowing back a long way, even though the King of Navarra legally recognised Rioja in 1102. However, 1492, when Christopher Columbus discovered the continent of America relatively unnoticed, was a crucial year for wine, because the last Moors had to leave the Iberian Peninsula along with their alcohol ban.

Christian monks, especially Cistercians, put the vineyards back in order. The Burgundians were the leaders in growing technique, and wine soon became the most important economic sector in the region. Even in 1787, when other regions were still far removed from such marketing instruments, the first producer association – the Royal Society of Winegrowers in Rioja – was founded.

The territory with its dry, slightly alkaline soil is excellently suited for winegrowing. Between Haro in the West and Alfaro in the East, there are around one hundred kilometres where vines find very good growing conditions on the banks of the Ebro. In the high altitude Rioja Alavesa, the vineyards stretch up to 700 metres altitude on clay and chalk soil, where full, fresh Tempranillos emerge. In Rioja Alta, the climate is similarly cool and influenced by the Atlantic, but the wines are softer. In contrast, the lower altitude Rioja Baja is more Mediterranean and dryer, with its alluvial soil and the most opulent wines. In addition, microclimates on slopes facing in different directions create niches for various styles. Even in the 20th Century, this potential allowed the crop land to grow quickly. In 1980, there was already 40,000 hectares, and today there is 64,000 hectares with vines which provide up to 300 million litres of wine in good years.

The autochthonous variety Tempranillo is as dominant as it is trendy. Its quality potential is high and can be significantly increased by storage and maturing in barriques. The good Garnacha is more of an aromatic addition, similarly to Mazuelo, Maturana Tinta and Graciano. The also autochthonous varieties were once present in large parts of Rioja, but were so susceptible to diseases, that “Gracias no” prevailed as the name for the ridicule of the industry. However, it primarily gives good results in the chalky soils of the valuable high altitudes, which is why it is currently experiencing a small Renaissance. With its high polyphenol content and the robust acids, this could result in a lasting resurgence. 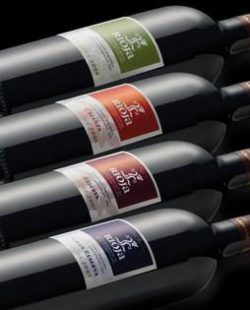 “The better white wine is a red wine“ (Spanish saying)

Up until recently, almost everywhere in Spain, white wine was seen as being a “light juice, fragrant and cheap; made without ambition and pride; condemned to be drunk young and cold“. This was the bitter complaint of Jesús Rodríguez, critic of El Pais, the most significant daily newspaper in the country. For some time now, winegrowers in Rioja have been focussing more on high quality white wines. However, up until 2007 there were only three white varieties – Malvasía de Rioja, which is not genetically a Malvasía, but has a lot of extract, Garnacha blanca and far and away the most frequent Viura (Macabeo) with its fruit and acidity. Then, after a long period of twisting and turning, the forgotten varieties Tempranillo Blanco, Maturana blanca, Torruntés and Monastel de Rioja were authorised again, as well as Verdejo, which originally came from the Rueda, and as a minority partner in cuvées also Sauvignon Blanc and Chardonnay.

The possibilities have not yet been exhausted, but for example barrel fermentation brings fine results for the whites. “We see Maturana as a mainstay for cuvées in the future“, explains Alex Tomé and shows a test plantation of Baron de Ley at 800 metres altitude. 15 years ago, there was only Tempranillo in these fields, and colleagues might have laughed at him for the statement. Today, many have great hopes for white wine.

Previously, Baron stood for accessible wines, “which you can drink on the day of purchase” and which are red as a rule. Tomé: “In this way, we primarily want to distinguish ourselves from Bordeaux and Chianti.“ In spite of all the esteem of the big brands, even the Sales Manager knows that terroir and origin are currently dominating the perception. Baron de Ley is still buying new areas which are then carefully developed. Soil analysis, the search for your own yeasts, it is all part of it today. Even for brands.

Lots of time, lots of wood

However, aging and oak barrels are benchmarks for red wine. The big wines mature for decades. Therefore, even the rating system significantly emphasises it. Even a Crianza must be three years old, a Gran Reserva five, including two in the barrel.

Previously, oxidatively grown wines with soft tannin and notes of dried fruits, nuts and sherry determined the middle palate of the Rioja. However, this style is increasingly being replaced by concentrated, fruity wines which correspond to an international style. So, some winegrowers are running after a trend. But it does not have to be that way.

“We did a project on reduction with the University of Rioja“, explains Johannes Winz from Baigorri. Completely without oxygen, as many do it, the wine develops in a less complex manner. “Contrary to Garnacha.“ So there is an abundance of stylistic devices. American or French wood is also important during the long storage times. Baigorri patiently tries a mixture of both. Even though shorter storage promises earlier turnover. There are a total of 1.2 million barriques, preferably made of American oak, in Rioja. That is more than in the USA. The number becomes even more impressive when you know that they only belong to 403 wineries. 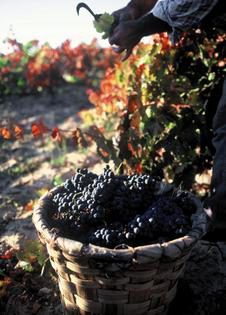 In the 19th Century, first the French winegrowers came, who were fleeing from the phylloxera epidemic and wanted to build up a new livelihood here. The phylloxera followed them which destroyed the whole winegrowing industry. The interlude as a Bordeaux replacement made the Riojans into exporters early on, which they still are today.

In the meantime, equipped with a supervisory authority – the Consejo Regulador – and the first and best rating in the country – Denominación de Origen Calificada, D.O.Ca. – Rioja generated significant turnover in export. And the rates have been increasing for years. Only in 2014, a record harvest was brought in. The lion’s share of 280 million litres went to Great Britain (13%) and Germany (7%), who have increased their expert shares by 28% and 38% respectively since 2006. The three words that most people know, when they are asked about Spanish red wine are Reserva, Tempranillo and Rioja. What more do you want?

Yet the successful sales on many foreign markets have also led to a price war in one part of the market. In Great Britain, the turnover has stagnated in spite of rapidly increasing quantities. More and more wine should be sold at increasingly low prices. The property crisis in 2008, which hit Spain hard, also ensured price dumping. When it became known several years later that the representatives of Robert Parker sold valuations, the reputation was also ruined. Yet Rioja is still seen as very reliable internationally “with a proper price-quality ratio”, emphasises Winz. 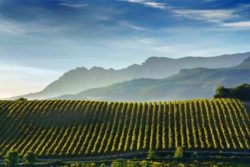 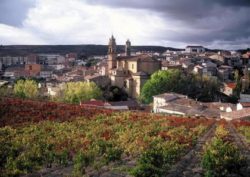 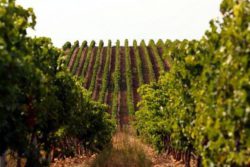 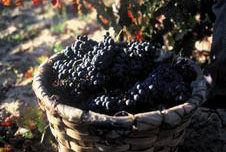 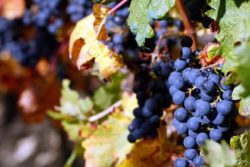 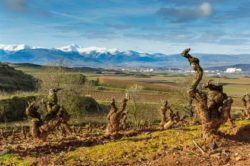 Another problem with Rioja is its strictness towards itself. In a time when grape varieties and terroir are the most important description for wine, the Rioja guidelines, which emphasise aging so much, are a little outdated. The origin from one of the 140 wine locations is not even allowed to be on the label.

Single site wines are a newer fashion. These vinos de pago together with the vinos de autor form a qualitative spear head. Even varieties such as Garnacha are gaining in popularity again. Modern Rioja does not have to be a single variety Tempranillo. Especially in the Rioja Alavesa, small producers with strongly yield reduced, high quality wines are trying to sound out the upper limits of these methods.

16,413 winegrowers work in Rioja, including Bodegas with several hundred hectares and farmers without a vineyard, who simply sell their grapes after picking. However, the region remains characterised by big brands. For example, a label such as Paternina has existed since 1909 and is in every supermarket today – because its quality is reliable. The brand is amongst the few examples worldwide, of how to bottle sophisticated quality in mass.

Like the Haciendas Company at Paternina, the owners are often large wineries, frequently with several mainstays, even in other regions. For them, an investment in Rioja is one option out of many. Yet, even there they value such iconic wines. Sub-regions and terroirs will gain in importance. “Our success”, explains Alex Tomé from Baron de Ley, “will depend on how well we explain the diversity of sub-regions and individual sites in future“.