Gin exists in many varieties. Unlike many other spirits it works well with over one hundred flavour additives, commonly called botanicals, providing great scope in terms of taste. Classic gins infused with aromas such as juniper, lemon, aniseed and coriander are in demand again. But modern spirits can deliver much more.
“Herr Lindemann” in Berlin’s Neukölln district is consistent with its pipes, metal shelves and gloomy walls. Factory style with a few flower arrangements as homely contrasts goes down well with the colourful clientele at this bar. Hipsters with bushy beards come here along with business women in suits because of the row of unassuming bottles behind the bar. The owner Peter Edinger keeps an arsenal of home-made fruit extracts and herb tinctures in them that he uses to refine his cocktails.

“Gin is combined with sage, mint tea, nutmeg and orange peel in ‘Miss Piggy’s Delight’,” he tells us. Cocktails with a feel-good factor, you could say. This interplay between indulgence, health awareness and urban self-portrayal virtually has one spirit written all over it: Gin. 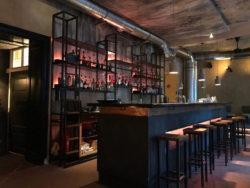 Unlike many other spirits, gin varies massively in style with its intense aromatic compounds (-->Varieties and Terminology). Well over one hundred flavour additives, commonly called botanicals, provide great scope in terms of taste.

Serving mixed drinks without tropical fruits was a definite no-no in bars for many years but nowadays, not just gin hardliners consider them to be a triviality. Classic gins infused with aromas such as juniper, lemon, aniseed and coriander are in demand again. But modern spirits can deliver much more.

Floral hints of rose and lavender are popular overtones. Thyme, rosemary and sage provide an explosion of Mediterranean flavours. Herbs and teas cater to consumers looking for a drink with a feel-good factor.

Anything unusual, from creeping thistle to African devil’s claw, is en vogue. Best distilled in micro batches, whose slight differences in flavour are a quality feature. Some spirits are finished in a barrel, as is usual with many aged spirits. The Swiss supplier Nginious ages its gin in old vermouth barrels, giving it a hint of a matured Martini cocktail’s aroma. The Swedish distillery Hernö opts for juniper barrels that only hold 40 litres, according to the manufacturer.

Gin is dominated by Oriental and exotic spice flavours, alongside juniper from the cypress family. Regional roots are particularly highly prized with this drink made from neutral alcohol though, and producers make every effort to meet expectations.

A splash of Saarburger Rausch riesling from the top vineyard Zilliken rounds off “Ferdinands Saar Dry Gin” with local quince and cranberries.

“Lark Godfather Gin” tempts you with the flavour of endemic pepper berries on the island of Tasmania between the Australian south coast and the Antarctic.

The leading note of linden blossom in “Siegfried Rheinland Gin” weakened the national hero Siegfried according to German legend. 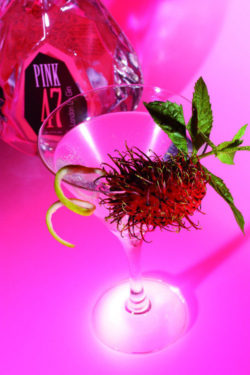 The ever broader range on offer caters to increasingly smaller niches through to social milieus. Eco freaks, urbanists, esoterics, the down-to-earth, smoothie fans, global citizens: Virtually any combination of attributes you like can be conjugated by adding dried plants and a specific design.

Anyone who wants to can order an entire stereotypical image at the bar: Belgium’s Spring Gin’s pink “Ladies Edition” appeals to health-conscious women with a moderate 38.3% alcohol. The flavours are defined by white peach and “China White Monkey Silver Needle Tea”. The latter is picked by trained monkeys at more than 2,000 metres above sea level. A cocktail with a kind of embedded cat video. Enjoyed with pink lemonade and pomegranate seeds.

The right story telling is convincing customers even more than during the previous vodka hype. One prime example of this is Monkey 47, which made the strange term “Schwarzwald Dry Gin” hip. The 47 hand-picked, partly regional ingredients and Black Forest spring water can be traced back to Montgomery Collins, according to the inventor. The Royal Air Force Commander came to Germany in 1945 and retired to the Black Forest later on.

As a true Brit, he did not want to have to do without his gin in Germany and produced the spirit according to his own recipe. This was picked up by the brand founders Alexander Stein, an ex-manager at Nokia, and Christoph Keller.

All traces of this Montgomery Collins have unfortunately been wiped out. Instead, the name has a clear affinity to its contemporaries and cocktails. Generals Bernard Montgomery and James Lawton Collins played a prominent role in the Normandy landings and marched as far as Germany. A very dry Martini is named after Montgomery. Collins is the name for a whole category of cocktails. But not even the meticulously kept British National Archives are familiar with a Commander Montgomery Collins.

Today the gin has at least as many awards as Montgomery Collins. In 2011, the International Wine & Spirit Competition crowned it the “World’s Best Gin” in London, where the Queen herself likes to clink glasses with gin. A quantum of solace: At least the recipe comes from one of her compatriots. 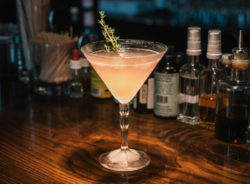 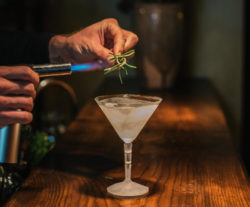 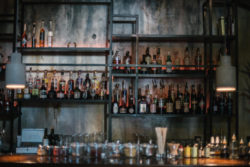 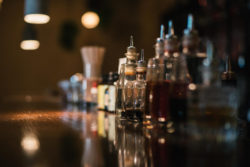 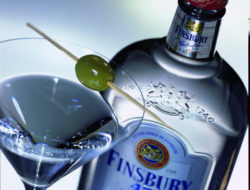 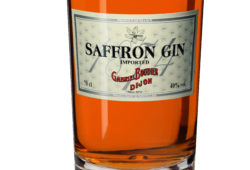 Spirit producers first discovered gin production for themselves based on their experience and sales channels. More and more start-ups have joined them in the meantime. One litre of alcohol from grain costs just a few euros in the industry, herbs and other flavourings are a moderate cost factor too. Production can be outsourced to a contract distillery and then the product can be launched on the market with virtually no maturation and associated profit-draining capital commitment.

€30 to €40 are a regular shelf price for a half-litre bottle. Start-ups are giving it a go with investments of just a few thousand euros. For some successful people in their mid-forties that is not much more than investing in a new mountain bike; giving rise to a hype that cannot be compared to anything we have seen in the past.

However, it is becoming more and more difficult to position yourself in the market. The next “Munich Dry Gin” would have to take on six local competitors, not to mention London. The stories of old recipes in forgotten cellars have already been told. The market is oversaturated. Nowhere near all the products will stay the course.

The Dutch name jenever is derived from the botanical name juniperus. It achieved its breakthrough in England when William III of Orange-Nassau became King of England and Scotland first and then married Mary Stuart. His soldiers soon shortened their jenever ration to gin and talked about “Dutch courage” whenever they drank it to pluck up courage.

William raised taxes on beer and foreign spirits to damage the French economy. Gin made from English grain was exempt from tax. As a result, gin rapidly rose to become a drink for the lower classes, not least because anyone was allowed to operate a still in London. The world’s largest city had 7,500 gin shops. In 1750, the consumption per head had increased tenfold to an estimated 60 litres. Even children drank alcohol owing to the poor drinking water hygiene.

Alcoholism and the social problems resulting from the inappropriate tax policies destabilised the entire country. The Gin Craze became an early drugs epidemic. In 1734, the Londoner Judith Dufour strangled her two-year old daughter, sold the baby clothes and turned the profits into gin straight away. Dufour was hanged for the offence. The artist William Hogarth immortalised the crisis in his famous “Beer Street and Gin Lane” engraving (link), which sets the destructive effect of gin against the healthy effect of beer.

The government finally enforced tax rises and licensing in 1751. Civil unrest followed, demanding a kind of “right to intoxication” from the authorities. Resistance arose in the big cities under the motto “No gin! No King!“. But the tide had changed.

The quality improved thanks to better distilling processes, even though turpentine was still a main ingredient for a long time to come. The London Dry Gin style was developed with the invention of the distillation column. Gin became a drink for the upper classes.

It experienced its next boom in the USA during the Prohibition years. The ingredients were mixed with alcohol in simple vats in back rooms and provided in questionable quality as bathtub gin in illegal speakeasies. Several gin cocktails have this miserable supply to thank for their existence. Seedy dives are still called gin mills or gin joints today. An alcoholic is described as gin-soaked. Mother’s ruin is said to reference the days of the gin crisis.

From the 18th century, the British navy used gin in its tropical colonies to mask the bitter flavour of quinine, which was the only effective anti-malarial compound. This preventive medicine did not just give gin a boost. Bitter quinine was dissolved in carbonated water to form tonic and a slice of lime was added against scurvy. Naturally, this all tasted much more bearable with added sugar. Gin was virtually a mixed drink from birth. Winston Churchill even thought: “Gin and tonic has saved more Englishmen's lives, and minds, than all the doctors in the Empire.”

With the emergence of the bar scene in 19th century’s New York came numerous gin cocktails. Historic classics like Pink Gin, Martini, Tom Collins, Gin Fizz, Gin Rickey, Gibson, Gin Sour or Singapore Sling are all gin based. The most famous is undoubtedly the Martini, which the otherwise stylish James Bond has been ordering “shaken” for decades, even though the short drink should be stirred.

The main thing is that the chemistry is right

Ian Fleming’s novel “Dr. No” describes in detail how the agent on Her Majesty’s secret service mixes a G and T with a lime on his arrival in Jamaica, in keeping with the Navy tradition. It has the right chemistry to thank for its success. Both ingredients are separately dominated by bitter notes but their molecular structure is similar, which is why they are attracted to each other. This masks the bitter taste. 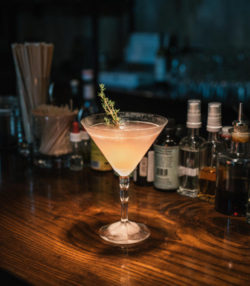 Gin has experienced different histories since the First World War depending on the country. As a standard drink in Great Britain, as a drink that white Protestants tend to drink in the USA or as a more herby speciality in Spain where gin tonic bars mix their gin, tonic and garnish as they wish.

Since the 1970s, it has been the drink that Billy Joel wrote a sad epitaph to with the failed existence of his “Piano Man” in many countries. Cocktails with as much exotic fruit juice as possible were popular for many years.

Noel Gallagher demanded gin and tonic in Oasis’ début single “Supersonic” in 1994. Barney Stinson, the notorious womaniser in the cult TV series “How I Met Your Mother”, ranks gin and tonic among his favourite drinks again ten years later.

Today, gin is mixed with lavender syrup and bitter orange marmalade, quince brandy or ayran. Mixologists are getting more and more creative. The selection of excellent quality tonics is also unrivalled and is quite rightly considered to be just as important as the spirit. Studies prove that young people are going out less often but are drinking with a greater awareness of quality.

Many people are buying their gin at the supermarket by the bottle like wine and enjoying it at home. Even in Germany, where millions of baby boomers look back on rather unpleasant first experiences with gin, the spirit has been the fastest growing spirits segment for years (GfK). Domestic consumption almost doubled between 2014 and 2017.

Like for most spirits, there is also a cocktail competition for gin. The Mare brand from Barcelona invited entries for “Mediterranean Inspirations” in Ibiza, a symposium for gastronomic geeks. Mare flavours like olive and basil literally cry out to be accompanied by food.

The winner Jo Last from “Domino Club” from Leeds perfected the botanicals in her winning drink “Heart” with a tea bag of rose and milk thistle. The perfect match to go with this was artichoke salad with mango vinegar.