Gascony – an unknown treasure deep in the south-west

Armagnac is France’s oldest and most traditional brand, the dashing d'Artagnan one of the most influential figures in French literature. And foie gras is officially part of the nation’s gastronomic heritage. Nevertheless, Gascony is hardly known internationally. The region has quite different attractions for the wine industry.
Richard Müller actually set out to create an artificial mist in 1932. But “out came only a snow-white gas,” complained the chemist. During a series of experiments, it sometimes even became a “tough white mass”. However, this offered unexpected possibilities. As silicone, today it facilitates daily life from gear lubrication to baking moulds.

Ingenious discoveries are often made by accident. Christopher Columbus just wanted to get to India to find cheap spices. As Nadine Raymond cycled on a Sunday morning near Saint Mont, she merely sought some relaxation from her research at the University of Bordeaux. The varietal expert discovered a ‘Lambrusque’, otherwise known as vitis silvestris, a wild form of the grapevine which entwines itself as a creeper through the forest and produces no fruit. The archetypal variety is a hybrid which pollinates itself. 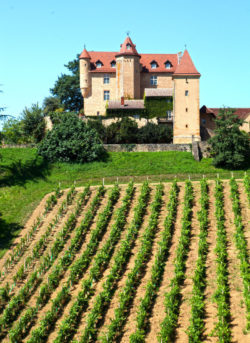 Such small miracles often occur in Gascony. Like many foothills, it has an enormous repertoire of grape varieties. Tucked away between the Pyrenees, the outermost corner of the Bay of Biscay, the Garonne and the long shadow of Bordeaux, the region is not well known among wine drinkers these days. It used to be very different.

A bone of contention for wine taste

When the Roman emperor Augustus introduced viticulture in the region in 27 BC and made it one of the most important suppliers of the empire, the locals were not Gauls but Basques -  something still reflected in the Aquitanian dialect, used as the second language on road signs. The name Gascony represented the entire south-west, a definition within which Bordeaux is still included culturally and linguistically.

In the mid-11th century, England conquered the region and made it a bone of contention with France for 300 years. Proud armies and mad kings, endless sieges and surprise attacks, looting and the booty of war provided considerable material for heroic and political narratives on both sides.

The emerging world power England gave the wine industry in the area around Bordeaux a real boost. In the first half of the 14th century alone, Gascony - including Bordeaux - exported around 150 million bottles of wine on more than 1,000 ships headed for England, giving the English crown the most substantial tax revenue.

Conversely, Gascony, with its fertile soils, was so structurally weakened by French attacks that it relied on food imports from England. A number of smaller noblemen changed their loyalty depending on the supply situation. In 1453, at the end of the Hundred Years War, Gascony became once again French, which was not to everyone’s liking. The city elders of Bordeaux, the capital of Gascony, even wrote a letter to Henry VIII asking to revert to English rule. In Britain, the lack of imported goods left a painful supply gap. The result was extremely high wine prices, which are still noted in William Shakespeare's works over a century later.

The English retained their good taste in wine, and have long since returned to Gascony. First they came as tourists when cheap flights became available. Now many have a holiday home and are generally tolerated by the locals.

Due to the lasting effects of the Phylloxera plague, the wine industry only returned in 1949. Armagnac was the big business of the post-war era, but fell out of fashion in the seventies. This freed up vast areas of land previously planted to colombard and ugni blanc and used for distillation. Ironically, an association of cooperatives called Plaimont set the course here again.

On a trip to California, founder André Dubosc came across modern versions of colombard, a variety which wasn’t competitive back in Gascony due to excessive quantity. With reduced yields and a few other suitable measures, he developed the grape variety in Gascony to create aromatic wines. Colombard contains thiols similar to sauvignon blanc, bringing lifted fruit aromas to the wine. 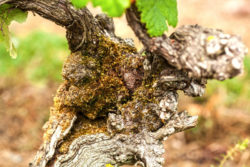 A heavyweight with vision

Gascony has its own climate, influenced by the Atlantic. Although the majority of the 1,100 millilitres of rain fall in the spring, it is still wetter than Brittany. The soil formations of the former prehistoric sea are often reminiscent of fjords and are loams of clay, sand and sometimes lime. Nights can be very cold, even in August. “It’s good for the wine,” says Nadine Raymond, “it gives it freshness”.

Saint-Mont is one of the most outstanding AOPs, especially for white wine. The top location is the Cirque du Nord, which as the name implies is an amphitheatre formation with north-facing orientation, from which some of the best whites emerge. A large part of all western French varieties originated in Gascony, including Cabernet Sauvignon and Merlot. However, the focus has generally been on varieties that are not available in Bordeaux, to avoid the ‘me-too’ effect.

Manseng instead of me-too

“Petit manseng is two million years old,” explains Raymond. “The small berries with their hard skins retain high acids and sugar content, even in long hours of sun” and yield wines with longevity. It enhances dry whites, especially as a blending component, with complex acidity, expressive aromas of exotic and citrus fruits such as pink grapefruit.

The same applies to the more delicate relatives gros manseng, petit corbu and arrufiac, which result in complex cuvées. “With almost all of these grape varieties,” said Olivier Bourdet-Pees, managing director of Plaimont Producteurs, “wine growers had to learn how to cultivate and develop them again”, because this is exactly where the region’s greatest future potential lies.

Plaimont invests heavily in reintroducing old varieties, with a lion's share of 50% of the total production area and much higher shares in some individual appellations. The showpiece is a vineyard from about 1830, which survived the phylloxera plague because of its sandy soils. Cuttings of 21 vine varieties were sourced from the 600 plants at Pédebernarde -  the south-west’s oldest vineyard – and propagated at a company-owned research station. Seven were previously completely unknown. In a grand gesture, ministers from Paris promoted the vineyard to the status of historic monument. 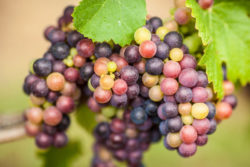 The results are encouraging in the age of climate change, especially amongst the reds, as they mature late and produce only moderate levels of alcohol. Chacolis, genetically a cousin of cabernet franc, is already regarded among enthusiasts as its potential successor. Dubosc got its name in honour of the great ampelographer, and because genetically it could only be associated (rather remotely) with tannat. Its tannins are relatively soft, in contrast.

Just two tardif (meaning ‘late’) vines remained at the Pédebernarde site. The variety, which was the first to be included in the French varieties register in 2017, today looks very promising. It contains large quantities of rotundon, a compound that is found in syrah, pepper and other spices. “The delicate pepper note,” Raymond explains, “could really excel in a red cuvée”. 3000 vines are planted, explains Bourdet-Pees, “but it will take a few years until its commercialised”.

Manseng noir, a cousin of tannat, did very well in an initial cuvée with merlot. Therefore, it’s been eagerly replanted, and the world's only 100% manseng noir is now being marketed as a summer wine to drink slightly chilled. In addition to round tannins, there are notes of pepper, olives and dark berries.

Ticket to the future

There is a note of calculated optimism in Bourdet-Pees' statement “Almost forgotten vines will be the varieties of the future”. Tannat, the variety from Madiran (a sub-region in Gascony) with the unique feature of the highest tannin content and healthy antioxidants, was hailed for its positive effect on heart health in the media.

In practice, these wines require years of ageing before they are ready to drink, and the tannins do not decrease. There are tricks to mitigate this: from limestone soils to sorting out unevenly maturing grapes, optimal tannin ripeness to micro-oxidation. They work, but the end result in the glass is still a tannic wine.

The big breakthrough has yet to come. “There are so many good reasons not to grow tannat,” says Bourdet-Pees. “Merlot is so much easier, but who wants another merlot? I hope we’ll soon be able to make good money with tannat.” 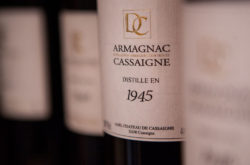 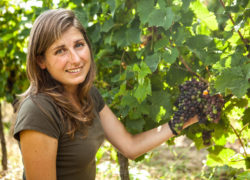 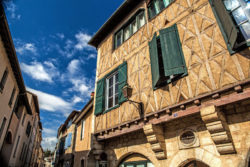 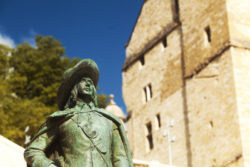 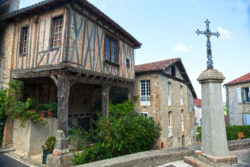 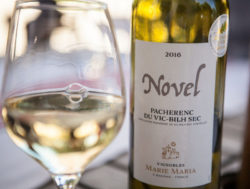 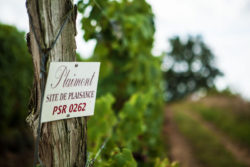 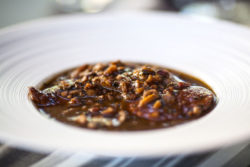 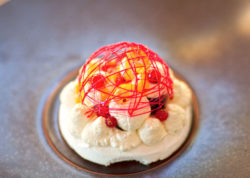 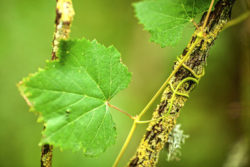 There is no major road through Gascony, hotel chains do not have branches here and the small airfields do not have the capacity for tourist crowds. “A village with 800 inhabitants is already considered large,” says Bourdet-Pees with a smile, “there are more ducks here than humans.”

Nevertheless, the Gascognais swear by the magic of their plaice. The dune of Arcachon is just around the corner as are ski resorts in the Pyrenees. Between sunflower fields and vineyards, a fortified church or a pretty castle recalls history time and time again. A certain Charles d'Artagnan de Batz- Castelmore lived in one such castle, and developed a prestigious career in the military, from his background as a minor member of the landed gentry. His story became the model for a humorous fictional character, who wouldn’t accept any criticism of Gascony’s wine.

The life of Cyrano de Bergerac made for a romantic comedy and became an integral part of French literature. “One does not drink,” enthused the philosopher Michel de Montaigne, “you kiss the wine and it gives you tenderness back.” He also came from Gascony.

Similarly, the Gascogne kitchen is a mainstay of French culture. Foie gras, the culinary national heritage, is considered the best. No restaurant menu is complete without fatty liver, as a plum filling, as a paté with sea salt or on the fig tart. Conveniently there is a sweet Pacherenc du Vic Bilh or a cheerful Floc de Gascony made from Armagnac and grape juice.

The lavish cuisine perfectly accompanies the rest of the region’s wine styles. Daube (a Gascogone stew) with poultry and Madiran, Ris de veau, lamprey in blood sauce and duck’s stomachs helped the Gasconais towards long life expectancy, and contributed to the history of nutrition book The French Paradox. 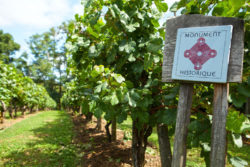 Armagnac completes such hearty meals. A study showed that the spirit prevents thrombosis. The oldest distillate in the world is alive and well in this region, reflecting Gascony’s mentality in its own way. Simple distillation gives it a certain rusticity, a lot of body and amazing breadth of taste. Armagnac ages forever and does not always seem to follow commercial motives.

Distillers and restaurateurs proudly display long rows of vintage bottles, sometimes back to the early 20th century. “You practically make armagnac for your grandchildren,” muses producer André Tariquet. But his bottles will reluctantly be sold. Here, too, there is a stark contrast to the glittering luxury world of nearby Cognac.

With this mixture of tradition and joie de vivre, tourism could surely be vigorously boosted. The Monastaire de Sermont, built by monks in the 11th century, is full of anecdotes. Colleagues from the Burgundian Cluny Abbey, at that time leader in viticulture technology, established the vineyards, which are still among the top locations today. According to legend, they did not take the rest of their mission so seriously, being more interested in the girls in the village. As were the nine guards sent after them by the parents.

Later, the building went through the hands of an opera house owner, a millionaire and a television station - and fell into disrepair in any case. It was purchased back by winemakers. Now an architect has converted it into a boutique hotel. Residing over the kitchen is Belgian star chef Paul Tossens.

In the old vaulted cellar there are speciality tastings, assemblage workshops and cooking classes (including foie gras!). Winemakers paint colourful pictures of transfixed Chinese tourist groups, who will discover the originality of Gascony. Maybe it will take time to develop, but the Gasconais have already survived quite different periods of drought.