A red variety with low alcohol, great acidity, silky fruit and incredible sensitivity to terroir, Blaufränkisch has everything it takes to be a globally successful red wine variety in the premium sector. You might expect that it’s a raging success with winemakers all over the world. Actually it’s quite the opposite – still, maybe that’s not so bad after all.
"We should age the wines for two or three years. But we never get the chance." Matthias Jalits sounds slightly annoyed, which comes as a surprise. We’re tasting around thirty wines from the high quality Eisenberg DAC. Not all of the wineries are internationally known, but the samples are very good across the board.

In the glass, we have Krutzler’s "Perwolff". This wine from the previous year is world class, extremely dense with a substantial schist character. Fruits such as black cherry, blackberry, elderberry and blackthorn linger on the palate, while creamy nougat carries the extremely long finish. Both acidity and tannins are wonderfully soft. Any winemaker who has produced such a wine ought to be delighted. Jalits' problem? "Blaufränkisch improves enormously with ageing. That’s how we can prove the huge potential of the variety. But the wines never have time to age because the few Eisenberg winemakers are constantly sold out.”

The history of Austria's smallest DAC region is one of the most bizarre in the wine world. The almost 400 meter high escarpment is formed out of a complex mixture of sediments and deposits. A 250-million-year-old sea, a bedrock of the Mesozoic Era and sediments from the Earth's New Age make up a "geological window", as Dr. Maria Heinrich of the geological Federal Institute explains.

Sitting on this geology is Blaufränkisch, or Kékfrankos as it is called on the east side of the mountain - there the pretty villages with their snow-white facades belong to Hungary. Highly sensitive to soil influences, the grape variety is at home on this characterful terrain. The wines are slim with moderate acidity, soft tannins and well balanced alcohol. It’s exactly what contemporary wine drinkers want, and that's why the wines sell out so fast. "Until a few years ago Blaufränkisch didn’t interest anyone," muses Rainer Stubits, "but now it's in fashion. This is our chance. The winemakers here are hoping for a breakthrough.”

Eisenberg behind the Iron Curtain

The Eisenberg, or “Iron mountain”, is formally located on the westernmost spur of the Euroasian steppe belt. For a long time it was not a separate appellation, but a forgotten spot on the border controlled by the Warsaw Pact. The border line is still visible from the observation tower on the Geschriebenstein peak, where hardy plants and trees such as birch stand out with their bright leaves, clearly separate from the rest of the forest.

Wine has been produced here for more than 2000 years. Celtic winemakers were well established here and in what is now Hungary, until the Roman occupation arrived and propagated winemaking further North. Since the Middle Ages, high-quality grape varieties often bore the nickname "Fränkisch" as a distinction to the inferior “Heunisch”. However, recent DNA analysis showed that Blaufränkisch originated as a natural cross between Blauer Zimmettraube and the humble Weißer Heunisch (AKA Gouais Blanc) in southern Styria, before 1750. 125 years later, it was admitted to the official grape variety register in Paris.

Like many older varieties, Blaufränkisch is known under a number of synonyms, most of which are a literal translation into the respective national language. Broadly, the vine follows the territorial expansion of the Habsburg Empire. Already by the Middle Ages, the dynasty brought together several countries that would later be Austria, and extended the monarchy from Veneto to deep into the Balkans, on the Russian border and from Krakow to Sarajevo.

Known locally as Frankovka Modrá, the variety represents 9% of Slovakia’s total vineyard surface, with just over 1700 hectares. It is celebrated with the annual Frankovka Modrá Festival. In the Czech Republic Frankovka usually delivers light wines for early drinking. In Croatia, known as Borgonja, it occupies about 880 hectares, or about 2.7 percent of the total acreage. Croatian winemakers often wrongly claim that Borgonja is synonymous with Gamay.

Gamé is the Bulgarian name, Burgundy Mare the Romanian. Both refer to the eternal confusion with Gamay and Pinot Noir. In neither country does the variety have special significance. Predominantly light wines come from Slovenia, and in small quantities from Friuli (Italy) and Voivodina (Serbia).

The German regions of production are rather divorced from the grape’s origin. Around 1,850 hectares of Lemberger, named after the Styrian town, grow mainly in Württemberg. Sensitivity to late frosts, powdery and downy mildew makes cultivation difficult here. Long, dry summers are not common to many parts of Germany. However, there are notable successes such as top wines from ‘Roter Hang’ of St. Anthony in Rheinhessen’s Nierstein. The vineyard area is slowly increasing.

Hungary probably has the longest and most magnificent winemaking tradition in south-east Europe, apart from Greece. Here, Celts cultivated wine 3000 years ago. In the 16th century Tokaj became the first protected origin wine in the world. When the first Sauternes were served in 1836, the botrytis-influenced wines of Hungary had long been known and appreciated. Kékfrankos, the Hungarian name for Blaufränkisch, also features in documents from antiquity.

With around 8,000 hectares, Blaufränkisch is more plentiful here than anywhere else in the world. Hungary shares latitudes with Champagne and the Rhone. Together with the imposing hills of volcanic and limestone rock, the conditions are excellent. Distributed almost across all growing regions, Kékfrankos is a popular everyday wine with large areas in Kunság and Hajós-Baja, and at the same time probably the most important indigenous red variety - and thus very promising for the future. 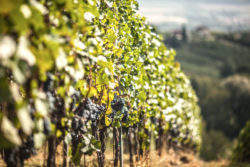 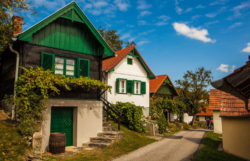 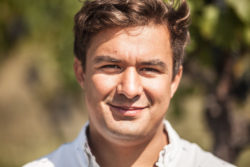 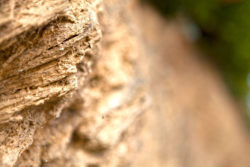 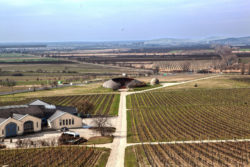 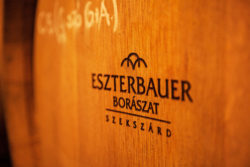 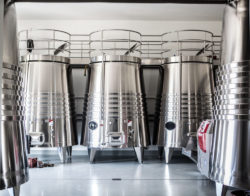 Over the years, it has become most known as part of the Egri Bikavér (Bull’s Blood) blend, a wine with a questionable reputation that is nonetheless improving. The best quality ‘Bulls Bloods’ comes from the eponymous Eger, the oldest growing area of Hungary, and from Szeksard, where the Bikavér was first mentioned. "It did not really help," recalls Zoltan Heimann, thinking about the battered image of Bulls Blood, “The pure Kékfrankos are the key to our future." The winemaker gained experience in Tuscany, Piedmont and Bordeaux, and makes playful, complex Kékfrankos wines with silky tannins.

Throughout the political upheavals of the 20th century, from the First World War to the collapse of the USSR, a great deal of wine knowledge was lost. A DNA test confirming that Hungarian Kékfrankos and Austrian Blaufränkisch are identical was only completed as recently as 2009.

Sopron describes itself as the largest contiguous growing area for Kékfrankos, where ambitious winemakers produce top quality wines. The region on the south side of Lake Neusiedl was discovered by Austrian winemakers like Fritz Weninger soon after the fall of the iron curtain. Making wine in a cross-border environment wasn’t without its challenges for producers like Weninger. Hungarian soldiers once famously confiscated tractors at the border, however all such setbacks are now just history. These days the region is better known for its high quality, concentrated, ageworthy wines.

Villány, the sun-drenched southern tip of the country, offers an ideal terroir for red wine. The mild climate that winegrowers like to compare to the Bourgogne produces some of the most elegant Kékfrankos wines in the whole country.

The future for Blaufränkisch looks good in Hungary. "The country is undergoing enormous change at the moment," says Lotte Gabrovitz, a WSET educated Hungarian wine specialist who has been watching developments for a decade. "Highly motivated winemakers with international experience are producing wines that deserve to be on the global wine map. Hats off to this new, highly educated winegrower generation, who are making these unique wines in the face of a challenging political backdrop."

On the Austrian side of Lake Neusiedl, about 2,800 hectares of Blaufränkisch are part of the fabric. Matthias Bauer began to produce clean wines in Horitschon in the 1970s, by transferring the hygienic standards of the dairy industry to the wine. It was a pivotal moment. Blaufränkisch began to be considered as a national grape variety, and is now even registered in the "Register of Traditional Food", where a federal ministry keeps it as a cultural asset between Beuschel (chopped veal heart and lungs) and Sachertorte.

Coincidentally, it also supplied the genetic material for a whole series of crossings. Some of them, like Roesler and Rathay, share the fate of so many new breeds: they have never really made it into the canon. Names like Acolon, Blauburger, Heroldrebe or Cabernet Mitos are confined to a lower quality status. Only Zweigelt is different. The cross between Blaufränkisch and St. Laurent is today the most cultivated red variety of Austria.

The true star, however, is Blaufränkisch itself. The best producers soon worked towards longer maturation times and more sensitive use of wood. “At the end of the nineties, many winemakers understood that varietal Blaufränkisch gives us a better way to stand out than blends and cabernets," remembers Kurt Feiler, whose Blaufränkisch wines from Neusiedlersee have cult status.
Almost every fifth red in Austria is a Blaufränkisch and almost all are grown close to the eastern border.

Only plantings in Carnumtum (to the east of Vienna) remain small, though more recently growers are increasingly choosing to plant it, even if cultivation is difficult.
Spitzerberg, Leithaberg (both with chalky soils) and Lake Neusiedl are all developing as key regions for Blaufränkisch. Its importance is even growing in southerly Styria, more commonly known as a centre for white wine production.

Still, 94 percent of Austria’s Blaufränkisch is cultivated in Burgenland, which likes to call itself Blaufränkischland. The Mittelburgenland DAC was the first protected denomination of origin for red wines in Austria. In the long, dry summers, lush, ageworthy wines are produced on the deep loamy soils of the hilly landscape.

Heavier versions more suited for elevage in oak are bottled as Mittelburgenland DAC Reserve. Although this has been a popular style in the last two decades, it is increasingly being supplanted by a lighter and more nuanced style. In the Eisenberg DAC, overt oak influence is specifically prohibited in the classification’s stylistic charter. The spicy, ripe fruit and minerality of the wines is best enjoyed without make-up!

Blaufränkisch certainly has huge potential, with its light, drinkable style in tune with the zeitgeist. It even copes comparatively well with the increasingly hot climate. Winemakers in Friuli, Switzerland, Andalusia, British Columbia, New York, Adelaide Hills and even Japan and Peru are experimenting with the variety. But why isn’t the world alight with Blaufränkisch hype? "Sometimes, for one reason or another, a whole category of wine is simply ignored," says Eric Asimov, the renowned wine critic of The New York Times. "Blaufränkisch is the perfect example of this."

Small Kellerstöckl (modest buildings situated directly in the vineyards) are scattered over the Eisenberg slopes like houses built from lego. Wine was made in these shacks in the past, although not in any commercial quantity. Today, many Kellerstöckl are rented out to tourists, who enjoy over 2,000 hours of sunshine per year in the dreamlike solitude.

Despite the growing international attention, many of the Eisenberg DAC’s 46 winegrowers still commute to Vienna every day to earn their living. The region has hung on to a down-to-earth, humble quality which seems quite at odds with its exceptional wines. Perhaps this lack of pomposity is what helps the grape variety show its best, with the Eisenberg hills as its compass.