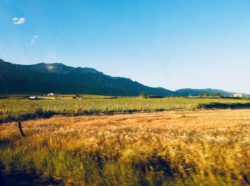 One of the first things any student of wine learns is the classic climate types: Maritime, Mediterranean and Continental. The underlying conceit is that these three profiles encompass the entire range of optimal conditions for grape cultivation worldwide. A new generation of high-altitude vineyards — many available for tasting at ProWein 2019 — is challenging these assumptions. From the Rieslings on the mountains of Colorado (1975m) to Muscat on the Tibet Plateau (3563m), the Mountain climate is ready for the limelight.

High altitude viticulture offers many advantages for both red and white varieties: long ripening periods; dramatic diurnal temperature swings; exceptional drainage and airflow; and rocky, barren soils that stress the vines productively and encourage lower yields. Whether it’s a snow-covered mountaintop in Argentina or the high, dry Plateau of the Rioja in Spain, it is self-evident that all that grows here must develop different coping mechanisms in order to thrive.

The Mountain climate also represents an elegant natural solution to climate change issues facing traditional growing regions. It doesn’t hurt that high-altitude conditions also tend to foster a distinctive elegance, finesse, and structure that dovetail neatly with the preferences of the modern palate.

Prospecting for rare air does carry a potentially hefty price. There is the danger of frost and temperature extremes, vine exposure, concerns about reaching full ripeness, and one of the biggest deterrents: the impractical and expensive reality of farming on a mountainside. CERVIM (Centre for Research, Environmental Sustainability and Advancement of Mountain Viticulture; www.cervim.org) even goes so far as to refer to high altitude vineyards as “heroic viticulture.” It is certainly not for the faint-hearted.

Yet at its heart, “steep site, cool climate” viticulture is not at all new to places like Germany, Austria, Switzerland and northern Italy. In fact, many established vineyards are enjoying the latest trends that hold cool to be, well... cool. An almost alpine elegance can be found in the chiseled precision from Austria’s 335 m high Zornberg in the Wachau (Hall 17) and the cool, herbal clarity of the 250-meter Heerkretz/Rheinhessen from Weingut Wagner-Stempel (Hall 14, Stand E 31). Looking beyond the Old World, the cool micro-climate of California’s Monte Bello (396 -822 m) wines from Ridge Vineyards (Hall 9) in the Santa Cruz Mountains fits this profile as well.

But perhaps no region has embraced the role of pushing the established altitude boundaries and expectations as much as Argentina, a land of breathtaking, snow-capped peaks. Bodega Catena Zapata’s (Hall 9) White Stones and White Bones Chardonnays from the dizzying heights of the Adrianna Vineyard (1400 m) are some of the most radical new wines made from this grape anywhere in the world and have often been referred to as the Grand Cru of South America. The vineyards were planted at these heights only in 1992, and it’s clear that these wines are shaped as much by the stony calcareous soil as the altitude. The unique drainage properties of the volcanic subsoil mean that the vines naturally maintain low yields and healthy fruit -- the goal of any producer.

As winegrowers gather experience in Mountain climates, a natural process of varietal selection has set in. The natural protection of red grapes, for example, means that many of these varieties also thrive at altitude. Darker pigmentation and thicker skins are a natural byproduct of exposure to extended sunlight, resulting in more color, tannins, and structure, with the added benefit of cool temps and great freshness. Winemaker Jose Lovaglio Balbo uses exclusively oak and concrete tanks to accentuate both the vibrancy of the fruit and the singularity of the terroir in his Malbec wines in the Vaglio project of the Susana Balbo winery (Hall 9) at 1250 meters in Argentina’s Uco Valley. While others are also pursuing this stylistic direction (see our separate article on the New Freshness), his commitment to high altitude is particularly striking. This movement up the mountain is not merely carving out a niche at the fringes of the winemaking world. It may well instead be cannily predicting where the mainstream will eventually need to head. According to David Schwarzwälder, a noted authority on Spanish wine: “The last 15 years have seen Spanish winemakers increasingly focusing on high altitude cultivation. Beyond more established regions such as Ribera del Duero, where vineyards routinely reach upwards of 1000 m, there are numerous small projects in forgotten vineyards in the mountains of North and central Spain. So it’s not so much about new regions as it is older vineyards, in many cases with ungrafted vines.” Schwarzwälder cites as an example winemaker Telmo Rodriguez (Hall 10), who is developing “wines of fine minerality in a postmodern wine style” in Valdeorras (650 m) and the surrounding highlands on the northern bank of the Ebro.

Even newer DOs such as Rueda (Hall 10), whose vineyards sit at an average altitude of 600-700 m above sea level, have embraced this elegance and energy into their typical style, varieties and viticultural methods. The region’s harvest, always the most important spectacle of the wine year, has adapted to utilize nature’s extremes to preserve the freshness and flavors of the region’s fruit. The grapes are picked by moonlight and then delivered from the high, cold plateau to the press before morning to limit their exposure to both sunlight and high temperatures. Rather than running on a campaign of full-bodied power and high alcohol, their wines are being lauded for a characteristic and dynamic freshness.

Sustainability is a factor as well. And many regions across Planet Wine are starting to wonder what comes next, as the erratic rising temperatures of climate change make the traditional varieties and flavors of a region into a thing of the past. Dr. Laura Catena of Argentina’s Bodega Catena Zapata founded the Catena Institute (www.catenainstitute.com), which is dedicated to studying traditional varieties, high altitudes and new regions. Speaking at MUST Fermenting Ideas, a recent gathering of wine minds in Cascais, Portugal, she warned that there aren’t hundreds of years to figure things out: “If we want to preserve certain flavors, we need to understand what they are and how to achieve them.” High altitude grapes are survivors, just like the winemakers who cultivate them. How long it takes the rest of the wine drinking world to seek this higher ground remains to be seen.