SA No. 1: Just a Spoonful of Sugar: Dry Innovation in Traditionally Sweet Territory 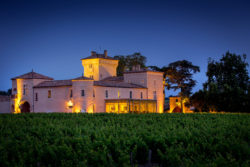