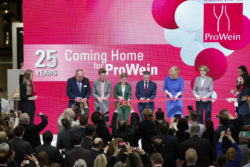 This year marks 25 years of growth and innovation at ProWein, the world's largest and most important trade fair for wines and spirits, and a fitting ceremonial opening was held on Sunday, 17 March. German Federal Minister for Agriculture Julia Klöckner headlined the ceremony, welcoming invited guests from the international wine and spirits industry to a rousing speech about the importance of the industry and the trade fair. "Wine is an important factor not only for the local and national economies, but also for culture and, just as important, for enjoying the fine things life has to offer. Winegrowing shapes the landscape of entire regions here in Germany. Wine also always carries the flavor of its origins with it in the bottle. And yet at the same time winegrowing is also becoming more international, innovative and digital. The field faces enormous changes, from both external events such as climate change and internal currents, such as changing attitudes on the part of the younger generation. Above all else, the passing years have seen ever-improving quality paired with rising expectations on the part of consumers," Julia Klöckner noted. "ProWein is special, well-established showcase for the industry. My congratulations for 25 successful years go out to the organizers. The Düsseldorf exhibition grounds are a global hub for the wine business. What originally started with 321 exhibitors has now expanded this year to almost 7,000 — a remarkable success story."

Words of greeting were also offered by Anne-Marie Descôtes, France's ambassador to Germany, and Thomas Geisel, Düsseldorf's Lord Mayor and Chairman of the Supervisory Board at Messe Düsseldorf. Another highlight for the attendees: a video greeting from Sting, who attended ProWein in 2017 as an exhibitor on behalf of his Italian estate.

The ribbon cutting ceremony was performed just before 9 am, the official opening hour for ProWein. Federal Minister Klöckner, the French ambassador, Monika Reule (Managing Director of the German Wine Institute), German Wine Queen Carolin Klöckner, Thomas Geisel and Werner M. Dornscheidt (Chairman of the Executive Board at Messe Düsseldorf) came together on the stage in the mall at the North Entrance to perform the deed. And with that: ProWein 2019 was underway. The fair will run through Tuesday, 19 March, with over 6,900 exhibitors from 70 countries presenting to over 60,000 industry visitors.